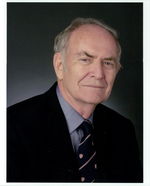 We regret to report the passing of Dr. James D. Baxter, former Chair of McGill’s Department of Otolaryngology – Head & Neck Surgery, at age 93 with his loving family by his side, on Monday, March 13, 2017.  Dr. Baxter led the department for more than 20 years from 1969-1990 with distinction and grace, ensuring it not only remained viable through some difficult times, but emerged stronger due to his leadership.

An educator and an otolaryngologist, Dr. Baxter was an Emeritus Professor at McGill University. In addition to serving as Chair for over 20 years, he was Otolaryngologist in Chief at both the Royal Victoria and Montreal General Hospitals. His research took him to Baffin Island where he developed treatment programs for ear disease and hearing loss in the Inuit population in the Canadian Arctic under the auspices of the McGill Baffin program (1972-1997). He headed the CPHA Task Force on the Health Effects of the increased Flying Activity in the Labrador area between 1985-87. He was awarded the Canada 125 Medal in 1992; the J.A. Hildes Medal in Circumpolar Health in 1996 and was author and co-author of numerous articles, papers and reports.

Dr. Baxter dedicated his career to the advancement of Oto-Rhino-Laryngol. & Broncho-Esophagol. – Head & Neck surgery with many other accomplishments that are numerous. Former department Chair, Dr. Melvin Schloss honoured him with the establishment of the Baxter Lectureship 24 years ago, which continues to highlight the Annual Resident Research Day and will be known now as the James D. Baxter Memorial Lecture, serving to remember and honour the life and academic contributions of an amazing man in perpetuity.

Our condolences go out to Dr. Baxter’s friends and family.

For those who wish, donations in memory of Jim to McGill University Dept. of Otolaryngology – Head & Neck Surgery would be sincerely appreciated by the family.