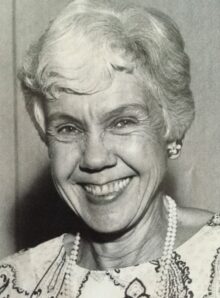 Eleanor Colle MacLean died peacefully at home on June 2nd, 2015, surrounded by her family. Dr. Colle, emeritus professor of Pediatrics at McGill University, and known affectionately as EC, was born January 27, 1926 in Minneapolis, Minnesota to Emily and Alfred Colle (founder of Colle-McVoy Advertising).

She received her undergraduate degree (BA, BS, 1946, Phi Beta Kappa) and Doctor of Medicine Degree (1950) from the University of Minnesota.

Following pediatric residency training at Bellevue Hospital in New York, at Guy’s Hospital in London and at the University of Minnesota, EC began her lifelong study of metabolic diseases of childhood, including the syndrome of ketotic hypoglycemia and insulin –dependent diabetes. During these early years, as one of the first women on the medical staff, EC helped to establish the new emerging discipline of pediatric endocrinology.

In 1962, EC and her husband, Dr. Lloyd MacLean, were recruited to McGill University. For the next 35 years, she maintained an active clinical research and teaching career at The Montreal Children’s Hospital and McGill University. From 1970-1980, EC was the Director of the Division of Pediatric Endocrinology and of the Hormone Laboratory at the Montreal Children’s Hospital. In 1980, a sabbatic leave at the McGill Center for Clinical Immunology and Transplantation set the stage for her second career, investigating the pathophysiology of autoimmune insulin-dependent diabetes.

EC was instrumental in furthering the clinical research studies that were being conducted on children with diabetes by her colleagues in the Division of metabolism at the Children’s Hospital.   Equally at home in the clinic and the research laboratory, EC was a chercheur-clinicien, even before the term was popularized. Throughout her career she demonstrated her estimable knowledge base and the ability to transfer this knowledge into improvements in patient care.

She published over 100 scientific papers and 17 Chapters during her career. EC was recognized by one of her colleagues as someone who had an unusual ability to balance work and home life as she “knitted her way through our academic conferences…but could quote a page number from any current journal”.

She was married in 1954 to Dr. Lloyd D MacLean, a marriage lasting 60 years until his death in January 2015. She was predeceased by her sister Ann Colle Rogers. “EC” and “Mac” raised five children (Hugh, Charles, Ian, James, and Martha) and were grandparents to ten grandchildren, aunt and uncle respectively to their nephew John Rogers.

An avid gardener, skier, hiker and tennis player who loved the “great outdoors”, EC was a voracious reader known for her weekly visits to the Westmount Library and her ability to consume several books each week throughout her life. Born into an era of transatlantic sea crossings, she was a prodigious letter-writer, leaving behind a window into the attitudes of the time.

Known to her grandchildren as Nana, she stayed connected via her ever-present iPad, playing Scrabble or Words With Friends online with anyone brave enough to take her on.

Eleanor also took great interest in politics and current affairs, and her family is perhaps most grateful both for the example she set as an informed, curious and avid life-long learner, and for her genuine willingness to engage with and embrace individuals of all walks of life—in this she was truly ahead of her time.

Condolences may be sent via Mont Royal Commemorative Services. A private ceremony will be held. In lieu of flowers, the family respectfully requests that those wishing to make a donation contribute to the charity of their choice.