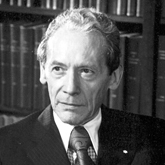 Charles Philippe Leblond M.D., Ph.D., D.Sc. Professor of Medicine, McGill University (1946 – 1991) Chairman, Dept. of Anatomy, McGill University (1957 – 1974) Companion of the Order of Canada Officier de L’Ordre National du Quebec At his residence in Montreal, surrounded by his loving family, Dr Charles P. Leblond passed away peacefully on Tuesday, April 10, 2007, at the age of ninety-seven. He was predeceased by his beloved wife of 64 years, Gertrude (in December 2000), and by his cherished second wife, Odette (in July 2004). He leaves to mourn his sons Philippe, Paul, Pierre, and his daughter Marie-Pascale, all from Montreal, and his devoted grandchildren Katrin and Nicolas, Jean-Christophe, Simon and Emma, Sabrina and Jacques, as well as many family members and friends. He is also survived by his brother Jean-Marie Leblond and family. Author of more than 430 scientific articles, Dr Leblond has been awarded many honours including membership in the Royal Society, London (1965) and in the American Academy of Arts and Sciences (1970), and received honorary doctorates from Acadia University (1972), McGill (1982), l’Universite de Montreal (1985), York University (1986) and l’Universite de Sherbrooke (1988). Resting at Collins, Clarke Funeral Directors, 5610 Sherbrooke West, where visitation will take place on Saturday, April 14 and Sunday, April 15 from 2 to 5 and 7 to 9 p.m. Funeral service in St. Leon de Westmount Church, 4311 de Maisonneuve West on Monday, April 16, 2007 at 11 a.m. Memorial service at 4 p.m. at Sainte-Lucie Church, Sainte-Lucie-des-Laurentides, Quebec. Interment at local cemetery to follow.