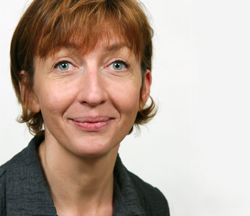 A study conducted by Marie Kmita’s (Adjunct Professor in the Department of Medicine (Division of Experimental Medicine) and the Department of Biology at McGill University) team at the IRCM, in collaboration with Josée Dostie at McGill University, shows the importance of the chromatin architecture in controlling the activity of genes, especially those required for proper embryonic development. This discovery, recently published in the scientific journal PLOS Genetics, could have a significant impact on the diagnosis of genetic diseases.

Each cell in the body contains a person’s genetic information in the form of DNA molecules, wrapped around structures called nucleosomes. Together, the DNA and nucleosomes form the chromatin, which is the main component of chromosomes.

“Our work shows that the regulation of the activity of genes controlling embryonic development is linked to the three-dimensional organization of the chromatin,” explains Dr. Kmita, Director of the Genetics and Development research unit at the IRCM. “In fact, this chromatin architecture, which varies according to the cell type, generates specific contacts between sequences of regulatory DNA and the genes they regulate.”