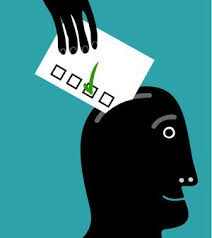 A new joint study by researchers at the Montreal Neurological Institute and the Centre for the Study of Democratic Citizenship, both at McGill University, has cast some light on the brain mechanisms that support people’s voting decisions. Evidence in the study shows that a part of the brain called the lateral orbitofrontal cortex (LOFC) must function properly if voters are to make choices that combine different sources of information about the candidates. The study found that damage to the LOFC leads people to base their vote on simpler information, namely the candidate’s good looks. Healthy individuals and those with brain damage affecting other parts of the frontal lobes spontaneously weighed both attractiveness and an assessment of the candidate’s competence when making their choices.

The new study provides the first evidence that the LOFC is critical for integrating different kinds of information to allow people to arrive at a preference.

Recent studies of political behaviour suggest that voting decisions can be influenced by “first-impression” social attributions based on physical appearance. Separate lines of research have implicated the orbitofrontal cortex in the judgement of social traits on one hand and economic decision-making on the other, implicating the orbitofrontal cortex region as a candidate for linking social attributes to voting decisions.

“How multiple attributes are combined in decision-making and how values are constructed is an important field that is just starting to be considered,” says Dr. Lesley Fellows, a neurologist and researcher at the Montreal Neurological Institute and senior author of the paper in the June 3 issue of the Journal of Neuroscience. “Recent research suggests that several areas in the brain carry information about the value of decision options, but it is not yet clear how these areas work together when we make a choice. The LOFC appears to be important when decisions are hard, helping to select the best from among options of similar value.”

The study tested subjects with and without damage affecting the LOFC. Participants took part in a simulated election task, where they were asked to vote for real-life but, unknown politicians based only on their photographs. Imagining themselves in an electoral period, participants were also asked to rate the perceived attractiveness and perceived competence of the candidates.

Participants without lesions in the LOFC appeared to make voting decisions based on both perceived attractiveness and perceived competence. Although subjects with LOFC damage could rate the competence of the candidates, they did not use this information when voting, instead relying only on the attractiveness factor

“This study provides a strong test of the function of this part of the brain,” says Dr. Fellows. “It shows that damage disrupts a specific aspect of how a decision is made. It provides evidence that LOFC is necessary for this function. This is the first time the brain basis of political behaviour has been studied with these methods.”

Understanding the brain mechanisms underlying these first impression effects on voting is one route to a deeper understanding of human political behaviour and offers a novel perspective on the broader topic of value-based decision-making, to date studied mainly through an economic lens.  The project was an interdisciplinary effort, bringing together McGill neuroscientists and political scientists.

Authors on the paper are: Lesley Fellows, Montreal Neurological Institute and RI-MUHC, Chenjie Xia, Montreal Neurological Institute, Dietlind Stolle and Elisabeth Gidengil, of the Centre for the Study of Democratic Citizenship, Political Science Department at McGill University. This work was supported by the Quebec Fund for Research, Society, and Culture and the Canadian Institutes of Health Research.

The Montreal Neurological Institute and Hospital – The Neuro is a world-leading destination for brain research and advanced patient care. Since its founding in 1934 by renowned neurosurgeon Dr. Wilder Penfield, The Neuro has grown to be the largest specialized neuroscience research and clinical centre in Canada, and one of the largest in the world. The seamless integration of research, patient care, and training of the world’s top minds make The Neuro uniquely positioned to have a significant impact on the understanding and treatment of nervous system disorders. The Montreal Neurological Institute is a McGill University research and teaching institute. The Montreal Neurological Hospital is part of the Neuroscience Mission of the McGill University Health Centre. For more information, please visit www.theneuro.com