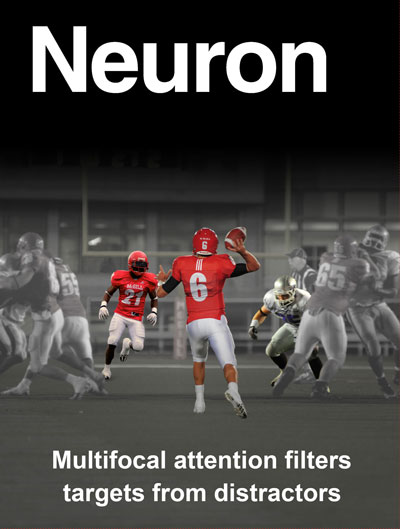 Imagine you’re a hockey goalie, and two opposing players are breaking in alone on you, passing the puck back and forth. You’re aware of the linesman skating in on your left, but pay him no mind. Your focus is on the puck and the two approaching players. As the action unfolds, how is your brain processing this intense moment of “multi-tasking”? Are you splitting your focus of attention into multiple “spotlights?” Are you using one “spotlight” and switching between objects very quickly? Or are you “zooming out” the spotlight and taking it all in at once?

These are the questions Julio Martinez-Trujillo, a cognitive neurophysiology specialist from McGill University, and his team set out to answer in a new study on multifocal attention. They found that, for the first time, there’s evidence that we can pay attention to more than one thing at a time.

“When we multi-task and attend to multiple objects, our visual attention has been classically described as a “zoom lens” that extend over a region of space or as a spotlight that switches from one object to the other,” Martinez-Trujillo, the lead author of the study, explained. “These modes of action of attention are problematic because when zooming out attention over an entire region we include objects of interest but also distracters in between. Thus, we waste processing resources on irrelevant distracting information. And when a single spotlight jumps from one object to another, there is a limit to how fast that could go and how can the brain accommodate such a rapid switch. Importantly, if we accept that attention works as a single spotlight we may also accept that the brain has evolved to pay attention to one thing at the time and therefore multi-tasking is not an ability that naturally fits our brain architecture”

Martinez-Trujillo’s approach in getting to the bottom of this long-standing controversy was novel. The team recorded the activity of single neurons in the brains of two monkeys while the animals concentrated on two objects that circumvented a third ‘distracter’ object. The neural recordings showed that attention can in fact, be split into two “spotlights” corresponding to the relevant objects and excluding the in-between distracter.

“One implication of these findings is that our brain has evolved to attend to more than one object in parallel, and therefore to multi-task,” said Martinez-Trujillo. “Though there are limits, our brains have this ability.”

The researchers also found that the split of the “spotlight” is much more efficient when the distractors are very different from the objects being attended. Going back to the very apt hockey analogy, Martinez-Trujillo explained that if a Montreal Canadiens forward is paying attention to two Boston Bruins in yellow and black, he’ll have a more difficult time ignoring the linesmen, also wearing black, than if he was in a similar situation but facing two Vancouver Canucks with blue and green uniforms, easily distinguishable from the linesmen in black’.

In the next generation of experiments, the researchers will explore the limits of our ability to split attention and multi-task – looking more closely at how the similarity between objects affects multi-tasking limits and how those variables can be integrated into a quantitative model.

This paper was published this week in the journal Neuron.