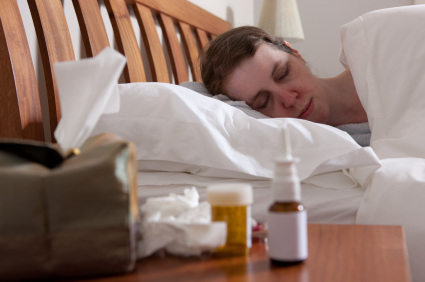 A new study conducted by researchers from McGill University, the Research Institute of the McGill University Health Centre (RI MUHC), and Sainte-Justine University Hospital Research Centre, Montreal, has put the accuracy of rapid influenza diagnostic tests (RIDTs) under the microscope. The meta-analysis of 159 studies showed three key findings: that RIDTs can be used to confirm the flu, but not to rule it out; that test accuracy is higher in children than it is in adults; and that RIDTs are better at detecting the more common influenza A virus than they are at detecting influenza B.

The research, led by by Dr. Caroline Chartrand, Sainte-Justine Hospital staff pediatrician and researcher, was published this week in the Annals of Internal Medicine.

Early flu diagnosis is key for both optimal patient care and infection control. While viral culture and reverse transcriptase polymerase chain reaction (RT-PCR) tests have been the gold-standards for detecting influenza, they can be expensive and the turn-around time for results range from one to 10 days. RIDTs attempt to overcome some of these problems. They are simple to use, give results in 15 to 30 minutes without having to be sent to a lab and in most cases, can be administered in routine clinical settings, like a doctor’s office or emergency departments.

With more than 25 rapid flu tests on the market, doctors and healthcare providers need to make sense of the voluminous literature on these tests. “This is exactly why we needed a meta-analysis,” said Dr. Madhukar Pai, senior author on the study, associate professor at McGill’s Department of Epidemiology & Biostatistics, and a researcher at the RI MUHC. “So many papers have been published, especially since the H1N1 pandemic, but no one had synthesized this body of literature into one single cohesive piece.  Our hope is that this work will help in informing future guidelines on the use of these tests.”

What do the study results mean for patient care? “Our results suggest a case for routine implementation of these tests at the point-of-care, especially among children, during flu season,” explained Dr. Chartrand, who was a McGill master’s student when she conducted the research. “It would have to be shown in clinical practice, but the routine use of these tests could mean significant improvements in patient care, especially children. For example, if you know your patient has the flu, you might not need to run other tests. Maybe you’d be able to prescribe antiviral medication earlier. And perhaps flu patients would be triaged differently and sent home more quickly, which is great news for high-traffic emergency rooms and clinics during the flu season. But it is important to note that rapid flu tests can be falsely negative and therefore should not be used to rule out flu.”

According to the Public Health Agency of Canada, between 2,000 and 8,000 Canadians can die of the flu and its complications each year, depending on the severity of the season. The Centre for Disease Control in the U.S. puts their number anywhere between 3,000 and 49,000 annually.

“Influenza treatment is most effective when started early in the course of the illness.  The ability to start specific influenza therapy sooner in persons at high risk for complications, such as pregnant women or individuals with heart disease, and who have a positive rapid test result, is a major benefit of these tests,” said Dr. Timothy Brewer, Director of Global Health Programs at McGill and one of the study authors.

The study was funded in part by the Canadian Institutes of Health Research (CIHR). Other collaborators include Dr. Mariska Leeflang, Academic Medical Center, University of Amsterdam; and Dr. Jessica Minion, University of Alberta.

Read about it: Annals of Internal Medicine