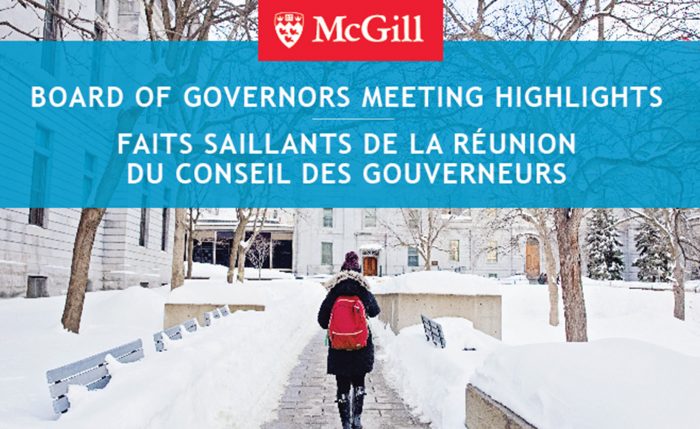 The full minutes of the meeting’s open session will be available following approval at the Board’s next meeting, on April 25, 2019. In the meantime, we would like to share with you the meeting’s important discussions, decisions and developments.

During the meeting’s closed session, the Board approved several recommendations of the Statutory Selection Committee:

The McGill Reporter will publish the names of the new appointments after the candidates have been notified.

Also in closed session, the Board approved a revised project for the R2R (recruitment to retirement) program on the recommendation of the IT Committee. The project will standardize the processes and tools for supporting McGill personnel at all stages of their careers.

During open session, on the recommendation of the Audit Committee, the Board approved the External Audit Plan for Fiscal Year 2019.

On the recommendation of the Building and Property Committee, the Board approved, in principle, a renovation project in the Lyman Duff Medical Building to support the Canada Excellence Research Chair in Human Pain Genetics.

Next steps regarding the Redmen name

As the Principal wrote in her January 30 message to the community, she is using the coming weeks to read, understand and reflect upon all the comments and points of view that have been expressed. She will announce her decision by the end of the current academic term.

As part of McGill’s participation in the pre-budget consultations led by Quebec’s Minister of Finance, the University is recommending that the government:

On Jan. 31, Principal Fortier participated in a U15 meeting, which included the opportunity to meet with federal Minister of Science Kirsty Duncan.

On Feb. 4, the Principal and Mr. Louis Arseneault, Vice-Principal (Communications and External Relations), met with Premier François Legault and Minister of Education and Higher Education François Roberge. The discussion included the RVH project.

Principal Fortier and Isabelle Bajeux-Besnainou, Dean of the Desautels Faculty of Management, participated in the World Economic Forum Annual meeting in Davos from Jan. 22-25. This year’s theme was “Globalization 4.0: Shaping a Global Architecture in the Age of the Fourth Industrial Revolution.”

The Institute of Islamic Studies is launching a new summer program to teach the Arabic language to students, researchers and others.

The Principal highlighted the extraordinary $200-million gift to establish the McCall MacBain Scholarships for outstanding graduate students at McGill. The Board then had a chance to meet the donors, Mr. John H. and Dr. Marcy McCall MacBain.

The Principal closed her remarks by congratulating some of the members of our community who recently earned well-deserved external recognition:

McGill was named among Montreal’s Top Employers for the 11th consecutive year.

Prof. Chris Buddle, Dean of Students, presented the Annual Report of the Committee on Student Discipline.

She also presented the report from Senate’s January 16, 2019, meeting. The Board approved three items stemming from Senate:

The Board held the second of two community sessions for the 2018-2019 governance year. The Board received one question from the community.” The full question and the Board’s response are available here.