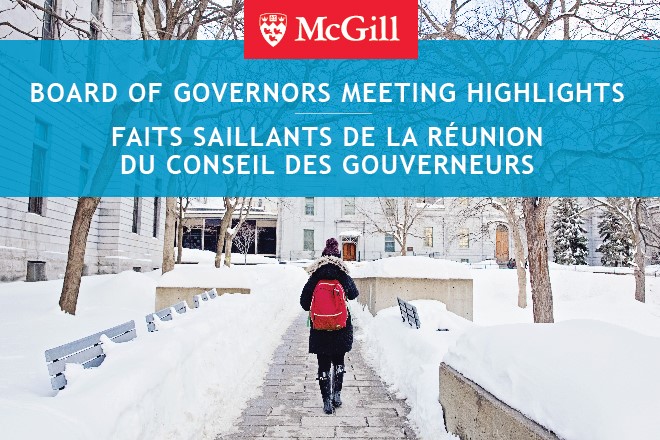 McGill’s Board held its third meeting of the 2019-2020 governance year on February 13, 2020. The full minutes of the meeting’s open session will be available following approval at the Board’s next meeting, on April 23, 2020. In the meantime, we would like to share with you the meeting’s important discussions, decisions and developments.

During the meeting’s closed session, the Board, on the recommendation of the Principal, approved the reappointment of Professor Josephine Nalbantoglu, Dean of Graduate and Postdoctoral Studies for a five-year term ending on June 30, 2025. The Board also approved, following the recommendation of the Principal, the extension of the term of Dr. Colleen Cook, Trenholme Dean of Libraries, for an extra two years until August 31, 2022.

The Board also approved the following recommendations of the Statutory Selection Committee:

The McGill Reporter will publish the names of the new appointments once the candidates have been notified.

During the open session, on the recommendation of the Nominating, Governance, and Ethics Committee, the Board of Governors approved the appointment of Mr. Bob Babinski as a representative on the Advisory Committee for the Selection of the Dean of Students and Ms. Martine Turcotte as an alternate member.

On the recommendation of Senate, the Board approved the creation of the McGill Cancer Institute. The Institute, which will include the Rosalind and Morris Goodman Cancer Research Centre, will provide a structure for pursuing McGill’s cancer research and educational objectives.

The Board of Governors, on the recommendation of the Audit Committee, approved the revised Enterprise Risk Management Policy. A new Sponsorship Policy was also approved.

A progress report on Key Performance Indicators (“KPIs”) was submitted to the Board for information. KPIs are a set of twenty-five metrics developed by the University to chart its progress towards realizing its strategic priorities.

Chair of the Board and Principal’s Remarks

The Chair of the Board made the following remarks.

This year’s Board-Student Forum, held on January 30, 2020, was again a successful event for all participants who engaged in productive and respectful discussion on topics of interest to both the Board and the student community. The Forum provided an opportunity for Board members to learn about initiatives led by student associations and groups from all around campus, and allowed students to learn about the work of the Board and its committees.

The Chair paid tribute to Mr. Jeremy Reitman who passed away on December 28, 2019. A graduate of the Faculty of Law, Mr. Reitman served on McGill’s Board of Governors from January 1999 to December 2008 and as Governor Emeritus since January 2009. The Board endorsed a motion of condolence to the family of Mr. Jeremy Reitman.

The Principal’s remarks focused on the following items:

The World Health Organization (WHO) has declared a global health emergency over the coronavirus outbreak, and the Government of Canada has issued an advisory against non-essential travel to Mainland China. While the Public Health Agency assessed the public health risk as low in Canada, McGill is carefully monitoring the situation.

The Quebec government is set to release its next budget on March 10, 2020. The Bureau de coopération interuniversitaire (BCI) made a significant ask of over $800 million in funding over the next three years to support additional faculty positions, improve student retention rates and the matching of labour market needs, the cost of IT infrastructure, and provide support for early stages of innovation.

The Principal took part in the BCI retreat which took place on January 28, 2020. The retreat focused on the group’s future directions and mandate.

On January 14, the Principal, with Vice-Principal Research and Innovation Martha Crago and Vice-Principal Administration and Finance Yves Beauchamp met with Benoit Charette, the Quebec Minister of the Environment and Fight Against Climate Change, to present the range of sustainability initiatives at McGill and to discuss the new Vic Project. The New Vic project will also be discussed in a meeting with Jean-François Roberge, Minister of Education and Higher Education set to take place on February 28, 2020.

The Principal reported that the Quebec government is creating “innovation zones” to foster innovation, attract foreign investment, and enhance Quebec’s international reach. McGill has been working with partners from the business and academic sectors to develop an innovation zone in clean tech.

From January 21-24, the Principal participated in the 50th anniversary edition of the World Economic Forum Annual meeting in Davos with 3,000 leaders from government, business, civil society, media and the art. The theme this year was “Stakeholders for a Cohesive and Sustainable World.” McGill is the only Canadian member of the Global University Leaders Forum (GULF), an advisory community chaired by the Principal, which is comprised of 29 of the world’s top universities.

In early January, the Naming Committee of the Men’s Varsity Teams provided the McGill community with an update. To date, more than 1,100 name submissions have been received, and the submissions period remains open until February 28th.

Last week, “The Neuro” (Montreal Neurological Institute-Hospital) launched its new brand and campaign, the largest in its history. The $200 million Campaign “Brains Need Open Minds” will support The Neuro’s vision to be a unique patient-centric, open science institution that accelerates the pace of discovery and delivers new cures and effective treatments for patients affected by neurological diseases.

This year, McGill24, the University’s annual day of giving, will take place on Wednesday, March 11. Over the past four years, more than 10,000 donors have contributed $6.3 million through this digital fundraising campaign.

As part of the 10th anniversary celebrations of McGill’s Sustainability Projects Fund (SPF), the Sustainability Office is installing 20 new hydroponic towers (six currently exist), and 12 new Spin Bike Gardens (three currently exist) around campus. To date, the SPF has allocated over $8 million to more than 235 projects, of which 86% are comprised of student-staff collaborations.

For almost 30 years, McGill has participated in the annual Centraide campaign and remains one of the top workplace fundraisers in Montreal. We are pleased to report that this year, the Campaign raised $430,055, exceeding our goal of $425,000. We thank all members of our community who have participated in the campaign.

Less than two years after earning his medical degree from McGill, Dr. Laurent Duvernay-Tardif adds Super Bowl champion to his impressive resumé, following the Kansas City Chiefs’ 31-20 win over the San Francisco 49ers. Laurent is the first doctor to win the Super Bowl.

McGill astrophysicist Vicky Kaspi has been named to Nature’s annual list of 10 “people who mattered” in science, for her role in Canada’s CHIME telescope project.

Daniel Almeida, a PhD student under the supervision of Dr. Gustavo Turecki in McGill’s Integrated Program in Neuroscience and at the Douglas Research Centre, was included in the latest Forbes Magazine’s Top 30 under 30 list.

For the third consecutive year, the Desautels Faculty of Management’s MBA program earned a spot in the Financial Times Global MBA rankings. Our MBA program is ranked 2nd in Canada and 91st worldwide.

Progress Reports and Presentations
A report of the Committee to Advise on Matters of Social Responsibility (CAMSR) was submitted to the Board for information. CAMSR is entering the next phase of its process, which will be dedicated to developing an implementation plan, in collaboration with the Investment Committee, to operationalize the recommendations approved at the December 5, 2019 Board of Governors meeting. The report will be submitted to the Board at the April 23, 2020 meeting.

The Board also received the following reports:

Marc Weinstein, Vice-Principal University Advancement, presented an overview of philanthropic results and activities, including an overview of key objectives and strategies for the Campaign for our Third Century.

The Board held the second of two community sessions for the 2019-2020 governance year immediately following the open session. The Board received two questions from the community. The full questions and responses are available here.