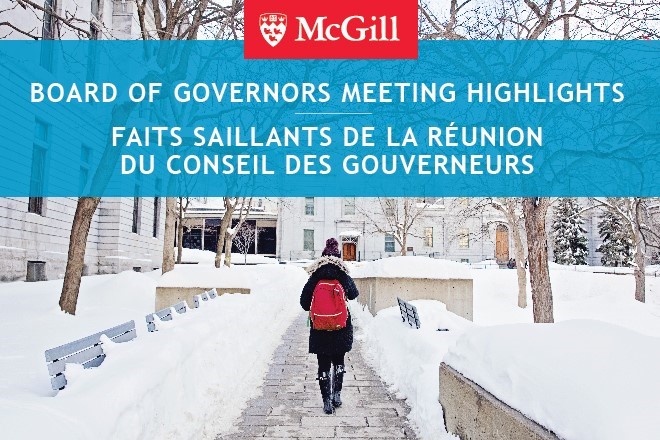 Dear members of the McGill Community,

McGill’s Board held its third meeting of the 2020-2021 governance year on February 11, 2021. The full minutes of the meeting’s open session will be available following approval at the Board’s next meeting, on April 22, 2021. In the meantime, we would like to share with you the meeting’s important discussions, decisions and developments.

During the meeting’s closed session, on the recommendation of the Statutory Selection Committee, the Board approved the promotion of seven Associate Professors to the rank of Full Professor. The McGill Reporter will publish the names of the new appointments once the candidates have been notified.

The Board also approved proceeding with Lot 4 of the redevelopment of the West Wing of the Stewart Biology Building, as per the recommendation of the Building and Property Committee. The construction of Lot 4 is planned to begin in June 2021.

The Board of Governors, on the recommendation of the Audit and Risk Committee, approved revisions to the Policy on the Approval of Contracts and Designation of Signing Authority, effective May 1, 2021. The Policy establishes a framework of authority, responsibility, and limits thereof, for the approval and signing of contracts, and disbursements on behalf of the University.

A progress report on Key Performance Indicators (KPIs) was submitted to the Board for information. KPIs are a set of twenty-five metrics developed by the University to chart its progress towards realizing its strategic priorities.

The Provost and Vice-Principal (Academic) Christopher Manfredi presented the second of three reports on the budget planning exercise for FY2021-2022, outlining the priorities, risks, and uncertainties that the University is considering as it begins the budget-planning process for the upcoming fiscal year. The final budget will be presented to the Board on April 22, 2021.

The Principal delivered remarks that focused on a variety of topics from across the University, including:

The Government of Quebec recently announced that universities are permitted and encouraged to implement additional in-person activities. As of Monday, February 8, 2021, McGill has gradually started offering complementary in-person academic activities on campus, with remote alternatives available to students.

With the continued aim of prioritizing the health and safety of its community, McGill will hold its Spring 2021 convocation ceremonies virtually.

Following the announcement of a cabinet shuffle in January by Prime Minister Justin Trudeau, François-Philippe Champagne (MP, Saint-Maurice–Champlain) was appointed Minister of Innovation, Science and Industry.

As part of the federal pre-budget consultation process, McGill is working with U15 and Universities Canada colleagues on a list of updated measures to restart Canada’s economy post-pandemic. These measures will include recommendations for a science-based industrial strategy and a proposal to attract and retain top-tier researchers.

In light of the COVID-19 pandemic, the Federal Government has recognized the urgency of strengthening Canada’s biomanufacturing capacity. McGill is working with its U15 colleagues to develop a plan outlining the potential contributions of universities to this important initiative.

Between December and February, the Principal had conversations about the New Vic Project with government officials from various Ministries (Higher Education, Finance, Economy and Innovation). More news on the file is anticipated in the near future.

From January 25-29, 2021, Principal Fortier participated in the Davos Agenda virtual summit, where she contributed to a panel on Reimagining Education. Some recuring themes from the meeting were: building back better, re-imagining, the net-zero economy, employee mental health, and improving access to quality education to women and others who face barriers.

McGill recently hosted a number of virtual-campus events that brought the community together. These included:

The Principal closed her remarks by congratulating some of the members of our community who recently earned well-deserved external recognition:

The Board received the following reports:

The Board held the second of two community sessions for the 2020-2021 governance year following the open session. The Board received one question from the community. The full question and response is available here