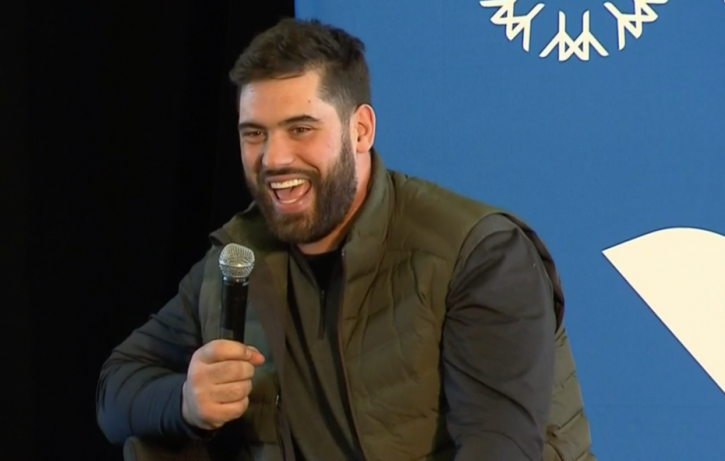 On February 9, an estimated 2,000 fans braved sub-zero temperatures at Montreal’s Parc Jean-Drapeau to cheer Laurent Duvernay-Tardif as he was presented with a replica of the Vince Lombardi trophy – carved from ice.

It was a fitting celebration for the first Quebecer to win the Super Bowl.

“This is completely crazy. Completely crazy,” a beaming Duvernay-Tardif told the crowd that was chanting his name. Just moments before, the massive offensive lineman for the Kansas City Chief had to bend down to collect a bear hug from Mayor Valérie Plante.

“He’s a great example, a great role model for youth and adults,” said Plante of Duvernay-Tardif, the first person to earn a medical degree while playing in the NFL. “For me, he’s a role model of determination, of being open-minded. He’s a very down-to-earth man.”

A series of firsts

It was just another surreal moment in a whirlwind week for the man known by his fans as LDT.

On February 2, his Kansas City Chiefs overcame a 10-point deficit to beat the San Francisco 49ers 31-20 in Super Bowl LIV. In so doing, Duvernay-Tardif set a series of firsts – becoming the first doctor, the first Quebecer and the first McGill grad to raise the Vince Lombardi Trophy. It marked the culmination of an unbelievable adventure.

“Sasha [Duvernay-Tardif’s friend and agent] and my girlfriend Florence stayed in Kansas City two days after the [Super Bowl] parade and we were talking over dinner about that crazy train that hit us over the past six years, that crazy journey,” he told reporters prior to the outdoor rally.

“It’s crazy because things go so fast in the NFL. The average career is three years, so when you hit your third year, you’re a vet and you have to act like it,” said Duvernay-Tardif. “The last two years, I really feel like I belong there and I’m a piece of the offence.

“With medical school on top of that, it’s been a busy six years.”

But, during the hour-long press conference at the Parc Jean-Drapeau Aquatic Complex he showed that he is much more, charming the crowded press gallery with his thoughtfulness, sincerity, humour and intelligence.

In both official languages.

A recurring theme during the press conference was the importance of family and friends.

Duvernay-Tardif spoke of the moments immediately following the Super Bowl’s final whistle – the cascading confetti, the coveted trophy and, of course, sharing it all with the people he loves. “My girlfriend and parents were on the field. I had never seen my mother cry tears of joy like that… Then to look up in the stands and see my 20 friends who had travelled to the game screaming like crazy when I pointed to them… You realize that everything you’ve been working for was for this moment,” he said. “To live that with my family was so special.”

Focus on football… for now

Duvernay-Tardif, who earned his medical degree from McGill in 2018, said his immediate plans are to concentrate on football for the immediate future, but medicine isn’t far from his mind.

“My interest is in emergency medicine and I feel it wouldn’t be the optimal learning experience to do it part-time, so I will wait until football is over,” he said. “I do have a few friends I started medical school with who graduated in 2015 and now they’re done their residency. They’re practicing in a few Montreal hospitals and it’s a great opportunity for me to shadow with them.”

On several occasions during the press conference, reporters who had covered Duvernay-Tardif’s exploits since he was playing for Collège André-Grasset and McGill remarked how through it all – the medical degree, being drafted by the Chiefs, signing a contract extension worth more than $40 million and the Super Bowl victory – he has remained the same down-to-earth person.

Once again, Duvernay-Tardif thanked his friends for keeping him honest. “I’m really good at keeping track of my friends … the same few I had from elementary school, CEGEP, McGill and medical school. They help me stay grounded,” he said. “They don’t want to hear about the Super Bowl; they want to have fun. If I’m not the same guy I was five years ago, they’re going to let me know.”

When asked about his growing fame (he’s often called “the most interesting man in the NFL”), Duvernay-Tardif shook his head and smiled. “What a blessing. I really feel honoured and privileged,” he said, noting that the support he’s received from back home helped spur him on.

“Fans can be pretty critical. But I feel like all the fans from Quebec, from Montreal, from Canada – everything has been so positive. I really used that to feed me through the rough times.”

Find your passion and dream big

Duvernay-Tardif said he hopes to use his new-found popularity to promote projects that are dear to his heart. One of those projects is the Laurent Duvernay-Tardif Foundation, which encourages children to find a balance between sports, arts and studies.

“What a great opportunity to be able to catch the attention of a young generation,” he said of LDT-mania. “Sport is great. Sport is a tremendous learning opportunity in terms of social skills and teamwork… but there [are] also studies and other things. Find your passion. Don’t be shy to dream big and have a vision for yourself. If I can pass that message on to kids, its mission accomplished for me.”