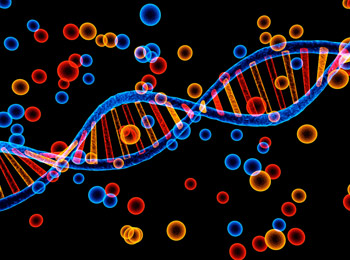 Novel next generation genetic sequencing technology has revealed that genetic heterogeneity within an individual’s breast cancer is much more prevalent and complex than once anticipated.

“The search for a small number of genetic biomarkers that can be targeted to stop cancer-causing cells from proliferating is complicated by the tumor’s capacity to evolve and develop resistance to therapeutic agents,” states Dr. Bruce Gottlieb, a member of Dr. Mark Trifiro’s lab at the Lady Davis Institute at the Jewish General Hospital.

The findings, published in the journal Human Mutation, suggest that the key to breast cancer goes beyond the identification of a specific genetic biomarkers to a deeper understanding of the selection pressures that bring about the genetic changes that allow malignant cells to proliferate. Breast cancer offers an excellent opportunity to study how innate genetic heterogeneity might contribute to the resilience of cancer cells, because 95% of cases occur after menopause when a woman experiences dramatic hormonal changes between their levels of androgen (male hormones) and estrogen (female hormones).

“I believe that genetic variance begins very early in human development, followed by a natural selection process. As we age, different variants are selected in response to changes in our tissue microenvironments, which clearly are likely to be strongly influenced by our external environment,” he said. The present study suggests that post-menopausal hormonal changes result in selection of a pre-existing androgen variant that results in breast cells become malignant.

Cancers, he posits, become resistant to chemotherapeutic agents because of selection pressures exerted by the tissue microenvironment on pre-existing variants, rather than somehow acquiring new mutations in a specific gene, often in a very short period of time. Indeed, using ultra-deep sequencing techniques, has for the first time started to reveal that there can be multiple genetic variants of a single gene in an individual, rather than just one or two, as predicted in our traditional understanding genetics.

“The bottom line is that we are going to have to create a far more complex genetic profile of individual cancer patients, in which not just the presence of genetic variants, but their frequency in specific diseased and normal tissues will need to be compared,” he states. “It seems likely that a truly personalized approach to cancer treatment will look for the specific factors that select a specific set of gene variants for each individual cancer.”