Dr. Robert Koenekoop, director of the McGill Ocular Genetics Laboratory at The Montreal Children’s Hospital of the MUHC, co-led this research. 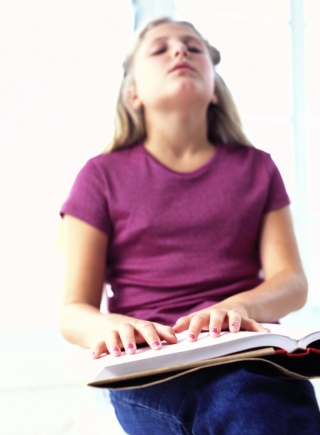 Finding genes for retinal degenerations has immediate benefits for people living with blindness and vision loss, their families, and their physicians. Establishing a genetic cause confirms the clinical diagnosis at the molecular level, helps predict the future visual prognosis, suggests therapies, and allows some patients to join clinical trials. While more than 200 genes for retinal degenerations have been identified, approximately 40-50% of cases remain a mystery.

When 11 year old Naomi Lalandec walked into Dr. Robert Koenekoop’s clinic at the Montreal Children’s Hospital of the McGill University Health Centre (MUHC) with blindness and dwarfism due to Oliver McFarlane Syndrome (OMS), her unknown mutation sparked an international gene hunt. Comparing her genome to others with OMS and Leber congenital amaurosis (LCA), another form of childhood blindness, uncovered a new gene that is critical for vision. What makes this breakthrough exceptional is that it opens up new treatment avenues for OMS and LCA and potentially other retinal degenerative diseases.

“It was like finding a needle in a haystack,” said Dr. Koenekoop, who is also a researcher at the Research Institute of the MUHC and a Professor of Human Genetics, Paediatric Surgery and Ophthalmology at McGill University. “It was so obvious to all of us that this was big; a new gene, a possible new disease pathway, a new treatment avenue.” With ongoing support from the Foundation Fighting Blindness (FFB), Canada’s largest charity supporting vision research, Dr. Koenekoop has spent more than a decade searching for genes linked to blindness. This search brought together an international team of scientists, including Dr. Michel Cayouette at the Institut de recherches cliniques de Montréal (IRCM), Dr. Doris Kretzschmar at the Oregon Health and Science University, Dr. Jacek Majewski from the McGill University and Génome Québec Innovation Centre and more than 30 others from around the world. Together, the team identified mutations in the PNPLA6 gene in families with retinal degeneration. This is the 20th gene associated with LCA and the first associated with OMS.

Although we’ve known about the PNLPA6 gene for more than 45 years, no one had identified that mutations in this gene can lead to retinal degeneration – until now. To better understand the role of this gene, the team studied how it functions in fruit flies. They learned that the PNPLA6 gene is expressed and located in photoreceptors (which are the light-sensing cells in the eye) and that mutating the gene causes photoreceptors to die.

To determine what PNPLA6 was doing in photoreceptors, the team did a variety of experiments. They observed that some lipids were elevated in fruit flies with the PNPLA6 mutation, which led them to conclude that PNPLA6 affects phospholipid metabolism. Phospholipids are located in our cell membranes where they influence the membrane’s shape and functioning. They also influence how cells communicate with each other by determining the signals that are able to pass through cell membranes. When phospholipids stop doing what they are supposed to do, important signals get lost and cells can no longer maintain their structures or respond to their environment.

This novel insight about the role of phospholipid metabolism in photoreceptor biology paves the way for new sight-saving treatments. These potentially game-changing results were published on January 9, 2015 in the prestigious journal Nature Communications.

“We are thrilled about this new collaboration involving Dr. Koenekoop and Dr. Cayouette,” said Dr. Mary Sunderland, Director of Research & Education at the Foundation Fighting Blindness. “In addition to being leading scientists, they are incredibly dedicated members of our community who are bridging the gaps between laboratory science and clinical research.”

Moving forward, the team is already thinking about how they can put their new knowledge to work. They are currently generating animal models of this mutation, which will be essential to study how manipulating phospholipids could generate innovative strategies to treat blindness.