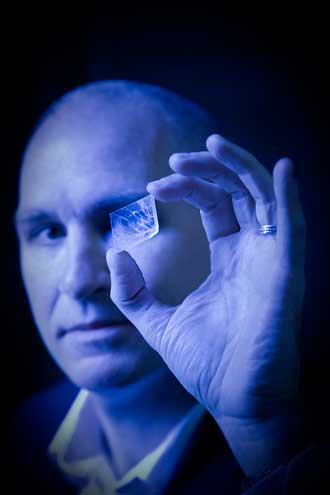 Diagnosed in toddlers, X-linked hypophosphatemia (XLH) is the most common form of heritable rickets, in which soft bones bend and deform, and tooth abscesses develop because infections penetrate soft teeth that are not properly calcified. Researchers at McGill University and the Federal University of Sao Paulo have identified that osteopontin, a major bone and tooth substrate protein, plays a role in XLH. Their discovery may pave the way to effectively treating this rare disease.

The findings were made by the laboratories of Marc McKee, a professor in the Faculty of Dentistry and the Department of Anatomy and Cell Biology at McGill University, and of Nilana M.T. Barros, a professor at the Federal University of Sao Paulo. The team built upon previous research that had shown that mutations in the single gene PHEX are responsible for causing XLH. The results of this latest research by Drs. McKee and Barros will be published in the March issue of the Journal of Bone and Mineral Research.

“XLH is caused in part by renal phosphate wasting, which is the urinary loss from the body of phosphate, an important building block of bones and teeth, along with calcium.” says Prof. McKee. “In pursuing other factors that might contribute to XLH, we used a variety of research methods to show that PHEX enzymatic activity leads to an essentially complete degradation of osteopontin in bones.”

This loss of osteopontin, a known potent inhibitor of mineralization (or calcification) in the skeleton and dentition, normally allows bones and teeth to mineralize and thus harden to meet the biomechanical demands placed on them. In XLH patients lacking functional PHEX enzyme, osteopontin and some of its smaller potent inhibitory peptides are retained and accumulate within the bone. This prevents their hardening and leads to soft deformed bones such as bowed legs (or knock-knees) seen in toddlers.

While not life-threatening, this decreased mineralization of the skeleton (osteomalacia), along with the soft teeth, soon leads to a waddling gait, short stature, bone and muscle pain, weakness and spontaneous tooth abscesses.

The fact that these symptoms are only partially improved by the standard treatment with phosphate – which improves circulating phosphate levels – prompted the researchers to look for local factors within the bone that might be blocking mineralization in these patients.

“With this new identification of osteopontin as a substrate protein for PHEX,” says Professor Barros, “we can begin to develop an enzyme-replacement therapy to treat XLH patients who have nonfunctional PHEX, much as has been done using a different enzyme to treat another rare bone disease called hypophosphatasia.”