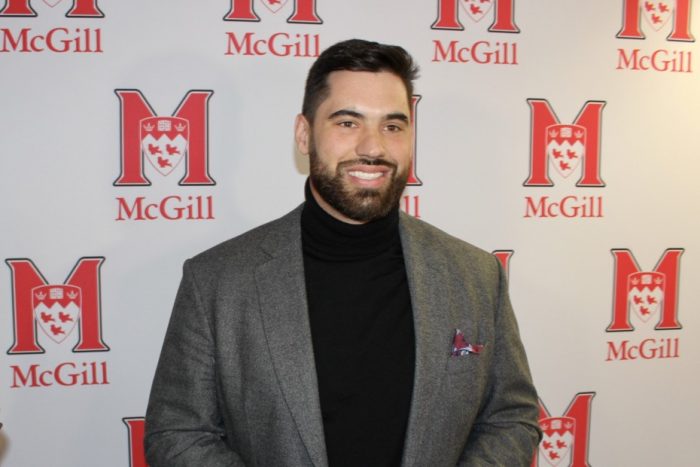 On February 2, a jubilant Laurent Duvernay-Tardif planted a big kiss on the Vince Lombardi Trophy after his Kansas City Chiefs had defeated the San Francisco 49ers 31-20 in Super Bowl LIV. The native of Mont-Saint-Hilaire had made history by becoming the first MD (which he earned at McGill in 2018) to win the NFL’s top prize.

From offensive line to pandemic frontlines, Duvernay-Tardif is driven by the desire to protect.

“It’s wild to think that just 10 weeks earlier I played in the biggest game in sports,” writes Duvernay-Tardif in a recent Sports Illustrated article. “I was reminded of that even at the facility, when one of the people training me turned and said, ‘You’re the football player, right?’ When I answered yes, he said, ‘Bro, you just won the Super Bowl.’ Indeed, I told him, and now I just want to help.”

From shoulder pads to scrubs

The move from football to medicine is a transition Duvernay-Tardif knows well.

Like a real-life Clark Kent, he is renowned for making quick wardrobe changes. While at McGill he would pull late night shifts in hospitals and head straight to Molson Stadium for practice, catching a few hours sleep on the dressing room floor before trading his scrubs for shoulder pads.

Selected by the Chiefs in the sixth round of the 2014 NFL draft, Duvernay-Tardif missed his own draft party because he was in a neonatal intensive care unit helping with an emergency C-section. Determined to finish his medical degree even after signing a multimillion-dollar contract, Duvernay-Tardif spent every off season back in Montreal to continue his studies and his hospital rounds until he graduated in 2018.

Friends on the frontline

In his Sports Illustrated piece, Duvernay-Tardif says the COVID-19 situation hit home while he and his girlfriend were sailing in the Caribbean in late February.

“On the water, our Wi-Fi was not always good. But I kept up to date with the virus, when it first moved to South Korea, then a few countries in Asia, then Iran, then Europe and then the U.S,” he writes. “Eventually, I knew we needed to get back to Montreal, and we changed our departure date to March 12 because we didn’t want to get stuck.”

Duvernay-Tardif had lots of time to think during his 14-day isolation back home. He felt bad about having to cancel fundraising events for his Laurent Duvernay-Tardif Foundation, an organization that promotes sports, arts and education for youth. He wondered about the upcoming NFL season.

“At the same time, I realize that I’m privileged. I didn’t lose my job. I don’t have three kids at home and a Zoom meeting and home school to teach,” he writes. “I know a bunch of my friends are going through difficult times; many are physicians who I met in medical school. I have friends who are working in emergency rooms. One does triage and tests patients for COVID-19. Those people are on the front line, and they’re giving everything to protect us. I don’t want to complain or anything. Because at the end of the day, I have a nice apartment, and I’m working from home, and I’m lifting from home.”

Soon after, he reached out to health officials to see how he could help.

At first, he was turned down because, while he has his medical degree, he doesn’t have his license yet. Instead, he became a spokesperson, using his fame as a platform to encourage people to practice social distancing.

But it wasn’t enough. As the situation grew more dire, the government called for relief for exhausted frontline health care workers. Retired workers and medical and nursing students were asked to pitch in. With the support of both his girlfriend and the Kansas City Chiefs, Duvernay-Tardif took a “crash course” and was assigned to a long-term care facility on the South Shore.

“My first day back in the hospital was April 24,” he writes. “I felt nervous the night before, but a good nervous, like before a game, and I packed everything neatly: scrubs, white coat, extra pens, even a second pair of shoes that I could leave in my locker, knowing they were clean.”

Helping administer medication, Duvernay-Tardif had to replace protective equipment and scrub his hands after every patient. By day’s end, he was beat, but ready for more. “Honestly, I was drained after – and looking forward to going back,” he writes.

A member of the NFL’s Players Association, Duvernay-Tardif is helping explore various scenarios for the safe return of football, including measures for training, travelling and playing on game day. “For now, we’re just getting started,” he writes.

Until then, Duvernay-Tardif has gladly traded his helmet for a face shield, knowing the work he is doing now has a more profound impact than even the biggest sporting spectacle in the world.

“Playing in the Super Bowl vs. heading back to the medical system during a pandemic is totally different,” he writes. “Back in February, I knew that 100 million-plus people were going to be watching, and I wanted to win. When you’re going in to help it’s more about your duty as a doctor and a citizen.”