A single negative human papillomavirus (HPV) DNA test – a newly introduced test which can detect cases of 14 high risk HPV strains to a high degree of accuracy – at the age of 55 suggests that women will be at low risk of cervical cancer, and there is little benefit of continued screening with this type of test.

However, for the more commonly used, and cheaper, cytology screening (also called pap or smear test), regular screening up to age 75 may still prevent some cancers, even though the benefits decline with age. The findings come from a new modelling study, published in The Lancet Oncology journal.

“Cervical cancers are caused by infections with oncogenic HPV types. We have long used cytology to detect the precancerous lesions caused by HPV, which can then be treated before they ever progress to cervical cancer,” says Dr. Talia Malagon a Postdoctoral Fellow under the supervision of Dr. Eduardo Franco in the Division of Cancer Epidemiology at McGill University’s Faculty of Medicine, and the study’s lead author. “While cytology screening has reduced the number of women who get cervical cancer, it is far from perfect because it does not always detect the precancerous lesions which develop into cancer. We have known for some time that directly screening instead for the HPV types that cause cervical cancer performs just as well if not better than cytology for screening in women below the age of 60. What was not known was whether an older woman who is HPV negative could just as safely stop screening as an older woman who tests cytology negative.”

“Our study does not necessarily suggest that all screening should stop at 55, since the benefits of continued screening depend on the type of screening used. For countries which still use cytology screening, screening at older ages should further reduce the risk of cervical cancer,” she adds. “However, our results suggest that for countries that use HPV testing as part of their screening, it might be possible to stop screening earlier than we are currently doing, provided women have a negative HPV test. Our study did not include any cost-effectiveness analysis, which will be a useful next step to inform policy decisions before any change in guidance is considered.”

The HPV vaccine has great potential to decrease cervical cancer incidence in the long-term, and vaccine programmes have been introduced in many countries. However, older women who have not benefitted from vaccination will still depend on regular screening for cervical cancer prevention [1].

Cervical cancer incidence and mortality remain high in older women – for example, U.S. women aged 70 years or older have a higher risk of death from cervical cancer (between 5.3-6.5 per 100,000 women), compared with women aged 40-44 (3.2 per 100,000). Women who screen above the age of 65 have been shown in previous studies to have a lower cervical cancer risk than women who do not screen, but whether this lower risk is the residual effect of screening at younger ages is unclear.

Most guidelines recommend that cervical cancer screening (either with cytology or HPV test) can be stopped after the age of 65–69 years, but there is a lack of high quality evidence for this recommendation. Additionally, few studies take the rate of hysterectomies in older women into account in their estimates of risk.

There are two types of cervical cancer screening tests. Cytology is still the most commonly used test around the world and is cheaper than HPV testing. Cytology can detect approximately 55% of CIN2+ cases (high grade precancerous lesions). Many countries are now implementing HPV testing for screening [2], which can detect approximately 96% of CIN2+. The increasing availability of HPV testing means that it might replace cytology in many countries, but due to the higher cost of HPV testing, higher income countries may be more likely to switch. 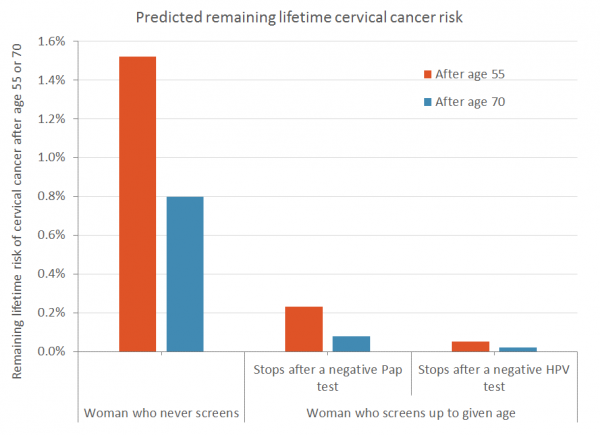 The research team used a mathematical model to estimate the lifetime risk of cervical cancer in older women who had not been vaccinated. They developed, calibrated and validated their model using Canadian health data, including cervical cancer incidence rates from Statistics Canada and HPV prevalence from the screening program in British Columbia (data from over 200,000 women). Based on Canadian data, they assumed that 42% of women who live until age 100 years will have a total hysterectomy.

Cancer progression was divided into seven stages: uninfected, transient infection, persistent infection, CIN1, CIN2, CIN3 and cervical cancer. The researchers predicted lifetime risk of cervical cancer both assuming women perfectly follow screening guidelines (screening every 3 years), and assuming a more typical adherence to cervical screening (closer to how often women actually screen in real life, which for many women may be longer than every 3 years).

The model predicted that without screening or vaccination, 1 in 45 women would be diagnosed with cervical cancer in their lifetime. Perfect adherence to cytology screening every 3 years between the ages of 25 and 69 reduced the lifetime risk of cervical cancer to 1 in 532 women.

For unvaccinated women with typical adherence to cytology screening, stopping screening at age 55 years was associated with a lifetime risk of cervical cancer of 1 in 138, compared to 1 in 160 when screening was stopped at age 70 years. Although increasing the age at which women stopped cytology screening from 55 years to 75 years led to incremental decreases in cancer risk later in life, the findings suggest that a substantial part of the reduction in risk is due to screening before age 55 years.

The authors stress that their results might not be applicable to future cohorts with high vaccination coverage or who will have been screened for most of their lives with HPV testing. However, since it will be many decades before cohorts vaccinated as adolescents reach the age of 50–70 years, they note that the results are likely to be applicable to older cohorts of women for years to come.

The authors also note that while the HPV DNA test is more sensitive than cytology in detecting high risk HPV types, used alone it may miss lesions caused by other oncogenic HPV types. However, the estimates suggest that the lesions not detected by the HPV DNA test at age 55 years have a low probability of progressing to cervical cancer in the remaining lifetime.

This study was funded by the Canadian Institutes of Health Research.
http://www.thelancet.com/journals/lanonc/article/PIIS1470-2045(18)30536-9/fulltext

[1] Regularity of screening depends on the country. For instance it is every 3 years in the USA and Canada, and 5 years in the Netherlands.

[2] The UK still uses cytology. In the USA, both cytology and HPV testing are available for screening and both are used. Cytology is still used in Canada, but there are pilot projects for implementation of HPV testing. Notable countries who have switched entirely to HPV testing are the Netherlands and Australia.