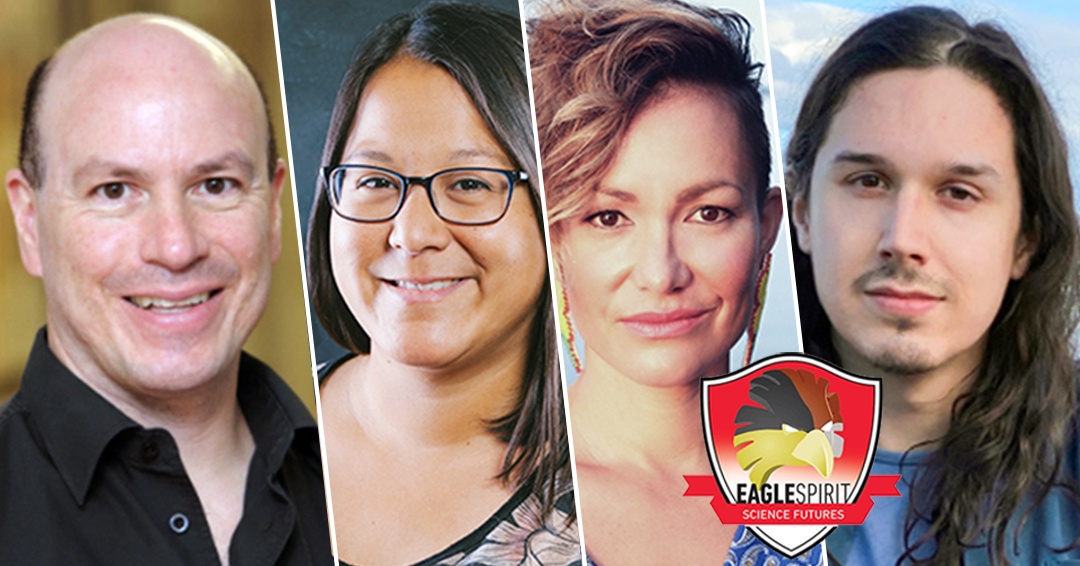 “Engaging Indigenous Youth: The Evolution of the Eagle Spirit Science Futures Camp,” a panel discussion organized by the Indigenous Health Professions Program (IHPP) and the Faculty of Medicine and Health Sciences, took place on May 13 via Zoom as part of the Faculty’s Bicentennial celebrations. The event was an opportunity to recognize and celebrate the efforts of the dedicated staff members and volunteers who have worked so hard over the years to create, run and fund the camp, which was founded in 2005, and to make it the grassroots success it continues to be today.
The event was hosted and moderated by IHPP Director, Dr. Kent Saylor, who noted that the camp and the IHPP are both part of broader efforts to increase Indigenous representation in the health sciences professions and reduce inequities in education and health care. The event heard from panellists Waneek Horn-Miller, the camp’s founder; her successor, Paige Isaac, and former camper and current camp coordinator, Alex Allard-Gray. The three shared their personal memories about how the camp began and the impact it has had on the lives of so many young people from Indigenous communities.

Waneek Horn-Miller, who is a Mohawk from the Kahnawake Mohawk Territory near Montreal as well as the former captain of Canada’s Olympic water polo team, founded the camp in 2005 as a way of getting Indigenous kids excited about higher education in the sciences and health sciences through sports. She was the coordinator of the First Peoples’ House at the time and she recounted how she and the First Peoples’ House administrator Lynn Fletcher mobilized a large number of volunteers and sponsors to get the first camp off the ground, with participants from across Canada. Ms. Horn-Miller, who shared photos from the early camps showing the campers taking part in hands-on science and medical activities as well as rigorous sports training, including lacrosse and track and field, noted that at the time the Eagle Spirit Camp was unique in Canada. There are now similar camps across the country, inspired by Eagle Spirit.

Paige Isaac, who is Mi’gmaq from Listuguj in the Gaspé region, succeeded Ms. Horn-Miller at First Peoples’ House and in running the camp. Ms. Isaac began as a camp councillor while she was a McGill student. After graduation, she became the outreach coordinator at First Peoples’ House and took over the organization of the camp. She spoke about how the camp went through several iterations, experimenting with partnerships with a variety of departments at McGill, while maintaining the grassroots focus on building relationships with Indigenous communities and volunteers. It was originally a three-day camp over Victoria Day long weekend. It was later expanded to a week and now takes place in the summer. Ms. Isaac keeps in touch with many campers and noted that many of them went on to higher education and are leaders in their communities.

Alex Allard-Gray, who is also a member of the Listuguj Mi’gmaq First Nation, is the Outreach  Administrator for the IHPP and helps coordinate the camp each summer. Mr. Allard-Gray started as a camper back when he was 14 and noted during the event that he’s been connected with the Eagle Spirit camp for more than half his life. He recounted how taking part in the camp helped him orient himself in terms of his interest in academics, eventually leading to a degree in Physiology and Kinesiology at McGill. He worked at the camp all through his degree, eventually joining the team on a permanent basis after graduation. Mr. Allard-Gray emphasized the importance of the camp for Indigenous youth who often come from very small communities and, without a chance to get a glimpse at higher education, might perhaps never have considered it as an option.
Dr. Saylor closed the event by premiering a promotional video for the camp, filmed in 2019, when the IHPP team was last able to hold an in-person camp. Dr. Saylor also took a moment to thank all the people who contributed over the years to building the camp, particularly the Indigenous volunteers, without whom it would not exist.
For those who were unable to attend, a recording of the event is available here.

2021 VIRTUAL EAGLE SPIRIT SCIENCE FUTURES CAMP: REGISTRATIONS NOW OPEN!
This year’s virtual edition of the Eagle Spirit Science Futures Camp for Indigenous teens in grades 7-11 (Sec 1-5) is now accepting registrations. This Indigenous-run summer health and science camp explores land-based science teaching, hands on tutorials in the health professions, as well as Indigenous cultural teachings and exchange. Because we cannot have an in-person camp this year, we are sending campers kits with stethoscopes, suturing practice, dental models, etc., along with a USB with videos and instructional materials. We have 40 kits to distribute to Indigenous youth over the course of the summer.
Please share this registration link and also our social media posts (Facebook with anyone in your network who might be interested: www.mcgill.ca/indig-health/essf-2021.
Call 514-398-1654 for more information.

WANT TO HELP, OR JUST LEARN MORE?
If you would like to help out or simply learn more about the Indigenous Health Professions Program or the Eagle Spirit Science Futures Camp, please contact Sadaf Farookhi at indigenous.health@mcgill.ca  Thank you! Welalin! Merci! Niá:wen!