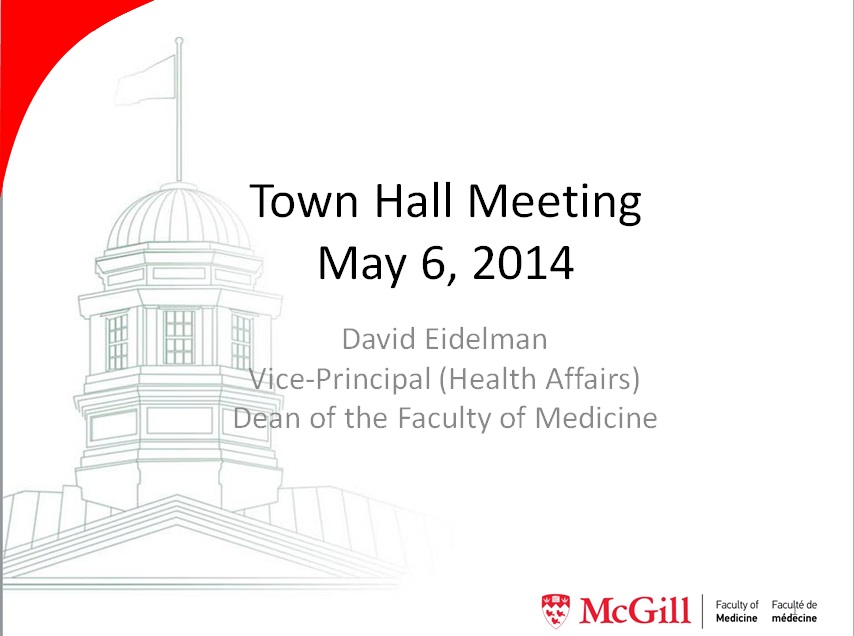 “I’m really proud to be here. I’m really grateful to McGill, because I am McGill and as [with] every other student here, we are here because we deserve it,” said Sophie Vincent, a first-year medical student during the Faculty of Medicine’s Town Hall held May 6, 2014.

The comments echoed a message made at the outset of the event by Dr. David Eidelman, Vice-Principal (Health Affairs) and Dean of the Faculty of Medicine at McGill. Speaking to the medical students who were part of the packed house in attendance in the Charles F. Martin Amphitheatre in the McIntyre Medical building, Dr. Eidelman said, “I am enormously proud of all of the students at our school. Remember that this is your school, you got here on your merit and you are an integral part of this faculty – each and every one of you.”

The May 6 town hall was held to discuss in detail the Faculty’s undergraduate medical school admissions process and to address concerns expressed in the community about its evolution over recent years. “In order to be an excellent school, it has to be very competitive to get in. If it isn’t competitive, we won’t be able to guarantee that our graduates are the best they can be,” explained Dr. Eidelman about the importance of widening the applicant pool for the program. “I can assure you it is very competitive and our graduates are outstanding.”

Dr. Saleem Razack, Assistant Dean, Admissions, Equity and Diversity at McGill said that the number of applicants has tripled compared to 2003 numbers, which brings McGill closer in terms of competitiveness to other faculties of medicine in Canada.

The methods used for increasing that applicant pool raised some questions among the audience, with one person asking, “Going from 900 to 2,800 applicants, I’m assuming a big part of that has to do with getting rid of the MCATs and opening the door to people who would not normally write the MCATs.  It’s a good evaluation process to put people on an even playing field, so why did we get rid of the MCATs?”

Dr. Razack explained that the test had been an impediment to having a competitive applicant pool. He also noted that students have been accepted to medical school through the Med-P program, without being required to take the MCAT, since the 1970s. In terms of class profile of McGill’s medical students, it was noted that more than two-thirds of the those entering McGill in 2012 and 2013 self-identified as being multilingual, including speaking at least English and French in addition to a variety of other languages in many cases.

Regarding the quality of students being selected, Dr. Razack highlighted that the average GPA of the incoming class has been steadily on the rise, with the average entering GPA of admitted classes in recent years regularly above 3.8 on a 4.0 scale.

During his talk, Dr. Razack also discussed diversity in the context of LCME-CACMS accreditation standards that all North American faculties of medicine must comply with.  During the question period, it was acknowledged that diversity is important but that misinterpretation may be caused by the fact that admissions, equity and diversity are one and the same office. It was recommended that they be separated. Dr. Eidelman noted that, while separating admissions from equity and diversity was not recommended in the recent External Review of the Admissions Office, it will be considered. Dr. Razack emphasized that neither equity nor diversity measures are considered during the admissions process.

Nebras Warsi, Class President for first-year medical students spoke of the origin of his desire to become a physician “I chose medicine because I have a strong desire to make a difference in my community, whichever community that is – whether it’s around Canada, whether it’s in Saudi Arabia, whether it’s the UK or anywhere in the world. I felt like by becoming a physician and through physicianship that was the best way that I could fulfill that desire.”

Aharon Silberman, a second-year medical student shared his appreciation of the manner in which the Faculty’s admissions process looks at each person as an individual. “There is no cookie cutter mold that they are looking for that you can fit yourself into a box,” he said. His advice to applicants: “Be who you are and hopefully they will see your strengths and your excellence and what you bring to the table.”

“For me the admissions process at McGill was really a revelation. It told me this is the school I want to be a part of,” said Sophie Vincent.

The future is bright

“We have to be true to the Faculty’s mission of training the best physicians that we can for society,” said Dr. Eidelman. “We are preparing the next generation of caregivers for those of us that are going to need them in the future, which is reassuring. We are confident we are doing things the right way.”

As the session drew to a close, former Dean of Medicine, Dr. Richard Cruess, remarked that, during his tenure, he was ultimately responsible for admissions and was satisfied it was based on the best practices at that time. “If we were still using the same methods now, however, it would be unacceptable,” he said. “We now have validated, new methods to assess subjective components. This is through multiple assessments with multiple observers, and this is what the Multiple Mini-Interviews (MMI) are doing. We are measuring outcomes, competencies. We’re using MMIs in a very creative and responsible way, as creatively as anyone in the world, except McMaster University, which is the leader in this. We should all be enormously proud of what we are doing.”

This final comment of the evening was from Carl White Ulysse, President of the McGill Medical Students Society. “I have the opportunity to exchange with student representatives from all of the faculties of medicine across Canada,” he said of his experience as a representative on the FMEQ and CFMS. “We have had a lot of discussions about balancing equity and diversity, as well as excellence, in the admissions process and what came out is that our processes at McGill are actually very innovative and very good. A lot of the presidents told me that they were very envious of how we do things here and that if they had the chance to do it [the same way] in their faculties, they would love that.”

For information on McGill’s admissions process for the medical school, click here:  http://www.mcgill.ca/medadmissions/about/guiding-principles

To read the External Review conducted in fall 2013, click here.