Registration is now open for the McGill University Institute of Health Sciences Education’s next public event co-hosted with the Faculty Development Office. Dr. Reinhart Reithmeier will be speaking on February 13 about “The 10,000 PhDs Project at the University of Toronto: Using Employment Outcome Data to Inform Graduate Education.” Details and registration here. 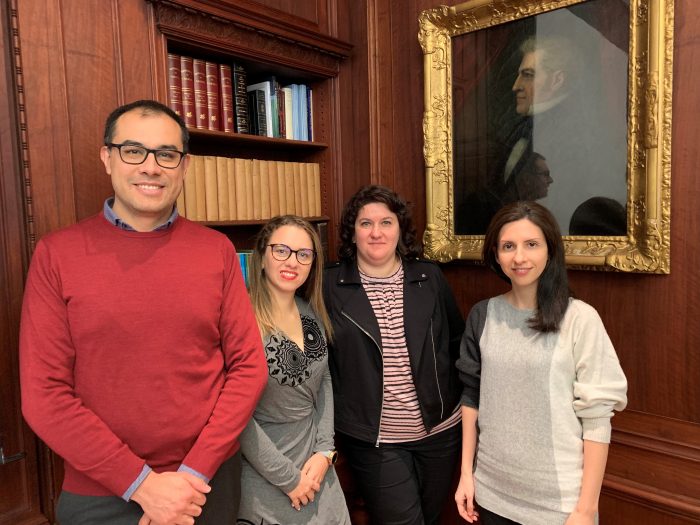 Four brave participants volunteered to present their research in PechaKucha format at a December membership meeting of the Institute of Health Sciences Education.

PechaKucha is a storytelling format in which a presenter shows 20 slides, spending no more than 20 seconds on each slide. Distilling complex health sciences education ideas and delivering them at a rapid tempo is no easy task.

Here is a snapshot of the presentations:

Coaching is almost always associated with sports, where athletes are continually and intensively trained for the duration of their often-short careers.

Surgical residents spend most of the time until they graduate in a similar environment, yet upon completing their residency, surgeons are often left to their own devices for ongoing training and acquisition of new skills, despite recent research suggesting that medical knowledge will evolve at an increasingly rapid rate in the years ahead.

“If elite performers in sports and music rely on coaches to maintain and improve their performance, why wouldn’t surgeons do the same when the health of their patients is at stake,” asked Dr. Sofia Valanci, a surgeon and PhD candidate in Surgical Education.

Recognizing the potential of coaching, Dr. Valanci and colleagues set out to explore approaches to mitigate barriers to coaching with a program in a safe and non-judgemental environment. As for the results to date, an interesting finding is that surgeons would prefer to be coached by someone they know rather than a stranger, despite their discomfort of being judged.

Dr. Carlos Gomez is an Assistant Professor of Medicine at McGill and Faculty Member at the Institute of Health Sciences Education, but he is also an avid soccer fan.

Dr. Gomez drew out playful analogies between soccer and assessment: both place an emphasis on notions of fairness, indicators of performance, reliability in judgements, rules, the increasingly present role of technology in decision-making, and the importance of individual performance within a team.

Nuanced conversation flourished during the Q&A period following his presentation, with a useful point that competency-based medical education (CBME) is being rolled out as a “movement” or significant change, which is not always the case.

“It really made me reflect on the conversation around reframing CBME implementation, not like something brand new, but an enhanced version of what clinical educators are already doing,” said Dr. Gomez of the discussion.

Trust was stressed as a vital concept with matters of accreditation.

“Trust is a foundation of any human relationship, but it also mediates our acceptance to change,” explained Dr. Gomez. “If we don’t trust in that something new is worth it, we will be less likely to adopt it. Trust also resides in the quality of the information that is being used to make decisions (e.g., do we trust this score to infer that someone is ready to practice medicine independently?).”

Dr. Sara Mortaz Hejri is a Postdoctoral Researcher at the Institute of Health Sciences Education. She presented research conducted alongside colleagues at Tehran University with findings that were recently published in Medical Teacher.

The work focused on comparing several outcomes between one group of clinical educators participating in a longitudinal faculty development program about role modelling and a control group, which did not participate in the program.

Despite these results, Dr. Hejri and colleagues found that the behaviour of participants with respect to role modelling, as measured by their residents and students in clinical settings, did not change after the program in comparison to the control group.

“It’s important to consider the influence of role models in developing students’ professional behaviour, attitudes and even future career path,” said Dr. Hejri. “Designing faculty development programs to help clinical educators be informed and explicit about their roles is important.”

Norma Ponzoni is an Assistant Professor at the Ingram School of Nursing and an Associate Member at the Institute of Health Science Education. She presented on the evolving role of the Nurse Practitioner (NP) and offered a frank assessment of the current challenges.

Quebec invested significantly in NPs in 2015 with the goal of having 2,000 NPs by 2025 as a way of addressing problems of healthcare accessibility.

NPs have an autonomous practice, the ability to order and interpret tests, prescribe medication, perform certain medical procedures, and can diagnose and present treatment plans for certain conditions.

Challenges here in Quebec include competition for clinical placements, the sustainability of small cohort programs like NP training, and the costs and labour involved in administering licensure exams for the multiple specialities that fall within the NP domain.

Conversation is taking place at the national level on creating a uniform entry-level licensure for all NPs across Canada to foster national consistency and workforce mobility, but there are numerous considerations to this, including the reality that the Quebec Order of Nurses may not be supportive of a national approach.

“I think it would be a mistake for the Quebec Order of Nurses to go along with the proposed change at the current time,” said Ms. Ponzoni. “Quebec NPs are part of the solution to addressing issues of accessibility to healthcare. Despite growing numbers, Quebec NP practice is still somewhat fragile. Even nearly a decade in, they are still challenged with negotiating their role while demonstrating their added value. Making a major change to how NPs are trained at the current time would be detrimental to their integration.”

PechaKucha is not an easy presentation format, but the four speakers did phenomenal work sharing complex topics in 20 quick slides. Thank you to the presenters.