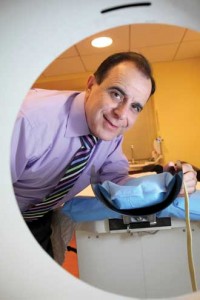 Dr. Petrides is a Professor of Neurology and Neurosurgery at McGill University.  Since 1990, he has been the head of The Neuro’s Cognitive Neuroscience Unit.  His special interest is the function of the frontal and parietal cortex in cognitive activity.  Dr. Petrides became a James McGill Professor in 2001 and was a Killam Scholar (2002-2007). His other accolades include:  the James S. McDonnell 21st Century Scientist Award: Bridging Brain, Mind and Behavior (2001),  election to the American Academy of Arts and Sciences in 2007 and to the Royal Society of Canada  in 2011.

Dr. Petrides has demonstrated that a specific part of the dorsolateral frontal cortex tracks information in our working memory while other parts select information for retrieval from memory or select what responses to make based on acquired rules.  In the same brain regions, he has studied single cells to understand the specific activity underlying working memory and the mechanisms at work in retrieving information.  He has produced the modern architectonic maps of the frontal cortex that are used widely in the neuroscience community.

The Royal Society’s fundamental purpose is to recognise, promote, and support excellence in science and to encourage the development and use of science for the benefit of humanity.

Fellows are elected through a peer review process that culminates in a vote by existing Fellows. Each year 44 Fellows, 8 Foreign Members and up to 1 Honorary Fellow are elected from a group of over 700 candidates who are proposed by the existing Fellowship.

The full list of Fellows and Foreign Members who have been elected can be found here.