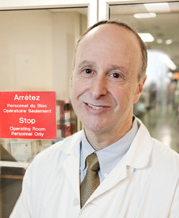 On behalf of the Board of Directors of the Jewish General Hospital (JGH), President Rick Dubrovsky is pleased to announce the appointment of Dr. Lawrence Rosenberg, Chief of Surgical Services, as Executive Director.
“Dr. Rosenberg is an ideal choice, given his in-depth skills as a physician and administrator,” says Mr. Dubrovsky. “We look forward to benefiting from his medical insights and leadership skills to make patient care even better, while enabling the JGH to play a leading role in working with its partners across Montreal and Quebec to strengthen the public healthcare system.”
Dr. Rosenberg has extensive experience as a clinician-scientist, a health care administrator, an educator and a strong advocate for pace-setting innovations that improve access to medical services of superior quality.
“As Executive Director, I appreciate that I am being called upon to preserve the underlying values of our community that are deeply embedded in the hospital and which have been a key driving force of achievement for decades,” says Dr. Rosenberg. “What inspires me is getting out of bed each morning and knowing I can continue to help build an enduring hospital where members of staff are motivated to deliver the very best patient experience and give back to the province.”
Since joining the JGH in 2007, Dr. Rosenberg has distinguished himself as the head of Surgery, as well as Director of the Transformational Change program. At McGill University, Dr. Rosenberg is Professor of Surgery and Medicine and he is the A.G. Thompson Chair of Surgical Research.
At the JGH, Dr. Rosenberg was instrumental in developing an innovative, award-winning partnership, in which JGH patients undergo simple surgery at LaSalle General Hospital. He was also the driving force behind Quebec’s first use of the Surgical Safety Checklist, which adds extra safety precautions to each operation. In addition, Dr. Rosenberg introduced NSQIP—the quality improvement program of the American College of Surgeons—to the JGH, which became the first hospital in Quebec to adopt this program.
Transformational Change, introduced under Dr. Rosenberg’s leadership in 2011, has been essential in inspiring staff to develop projects that significantly increase operational efficiency and reduce waste hospital-wide, thereby saving funds which can be used for patient care.
“Under his guidance, the quality of surgical services has seen significant improvement,” says Mr. Dubrovsky. “As well, staff across the hospital have been taking the initiative to introduce innovative measures that make the JGH much more efficient and cost-effective.”
Dr. Rosenberg received his M.D., C.M. from McGill, where he completed specialty training in general surgery. He holds an M.Sc. and Ph.D in experimental surgery from McGill and he completed post-doctoral studies and a surgical fellowship in transplantation at the University of Michigan. He also received an M.Eng. from the University of Waterloo, concentrating on knowledge management and innovation.
As Director of the Multi-Organ Transplant Program at Montreal General Hospital, Dr. Rosenberg inaugurated McGill’s Pancreas Transplant Program and led the team that performed the first successful liver transplant at McGill. He remains the only Canadian to have received the prestigious American Surgical Association Foundation Fellowship.
Mr. Dubrovsky and the Board wish to extend their appreciation to Johanne Boileau, JGH Director of Nursing, for her support as Interim Executive Director after the departure of Dr. Hartley Stern. They would also like to thank Valérie Vandal, Associate Director of Nursing for surgical services, for her work as Interim Director of Nursing.
Related coverage
The Montreal Gazette