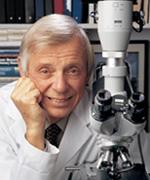 Born in Winnipeg, Dr. James Hoggs brilliant career and uniquely-blended background in pathology, pulmonary physiology and molecular biology has leveraged over 40 years of seminal contributions to the world’s understanding of lung disease. An outstanding researcher, teacher, lecturer and colleague, Dr. Hogg has arguably had a greater influence on the medical community’s knowledge of Chronic Obstructive Pulmonary Disease (COPD) and Asthma than any other individual worldwide.

During his Ph.D. program at McGill University in the 1960s, Dr. Hogg was thoroughly trained in lung morphometry, stereology, respiratory physiology and pathophysiology. He later expanded his experimental toolkit by learning the principles of molecular biology and high resolution lungimaging giving him an unrivaled set of skills and a remarkable ability to understand the relationship between lung structure and function.

Throughout his career, Dr. Hoggs research has remained focused on the mechanisms and anatomical sites of obstructive lung disease. His first publication in 1968 presented a revolutionary idea that the focus in COPD should not be on the large airways but rather on the smaller ones. Numerous groundbreaking studies followed both his and those of other investigators that verified the accuracy of Dr. Hoggs original hypothesis and advanced our knowledge of how the lung works in health and disease, including the pathophysiology of asthma and the harmful effects of smoking and pollution.

In 1977, in the midst of a successful academic career at McGill, Dr. Hogg was recruited to the University of British Columbia, and particularly St. Pauls Hospital. There he built a world-renowned centre for pulmonary and cardiovascular research, which grew from 1 trainee to 120 every year and 2 principal investigators to more than 30 over the next three decades. In 2003, the laboratory was named The James Hogg iCAPTURE Centre for Cardiovascular and Pulmonary Research in his honour. Dr. Hoggs impact is perhaps best attested to by his highly sought-after lectures around the world and by his training of distinguished pulmonary scientists.

An Officer of the Order of Canada (2005), Dr. Hogg was elected to the Royal Society of Canada (1992) and has been recognized nationally with a vast array of scientific awards. In 2003, he was the recipient of the prestigious American Society for Investigative Pathology Chugai Award, which, in addition to being honoured by the American Thoracic Society on several occasions, reflects his international eminence.

For more information on our CMHF laureate click  here