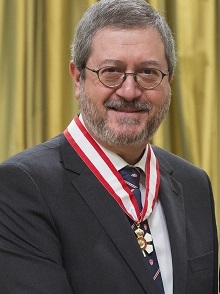 We are pleased to announce the re-appointment of Dr. Eduardo Franco as Chair, Gerald Bronfman Department of Oncology, Faculty of Medicine, McGill University. Dr. Franco has been at the helm of Oncology since 2011, leading the Department through two successful cyclical reviews and the creation of an interdisciplinary graduate program in oncology that is awaiting ministerial approval. He also assisted in the development of the Rossy Cancer Network, negotiated the Department’s renaming and oversaw its relocation to new headquarters at 5100 Blvd. de Maisonneuve West.  Dr. Franco also created an annual symposium and awards ceremony, now in its 7th edition, to celebrate what he values most in the department, its people and multidisciplinary diversity.

Dr. Franco is a James McGill Professor in the Departments of Oncology and Epidemiology, Biostatistics and Occupational Health, in addition to holding the position of Director, Division of Cancer Epidemiology. He is also the holder of the Minda de Gunzburg Chair in Oncology. He is the Editor-in-Chief of Preventive Medicine and serves on the editorial boards of several other prestigious journals.

Known for his contributions to our understanding of human papillomavirus infection as the cause of cervical cancer and using this knowledge to prevent this cancer via vaccination and improved screening strategies, Dr. Franco’s research program remains robust. He has published 473 articles in peer-reviewed journals, 61 book chapters, and edited two books on cancer epidemiology and prevention. Many of his articles have appeared in premier biomedical journals, such as The Lancet, Journal of the American Medical Association, New England Journal of Medicine, Journal of the National Cancer Institute, British Medical Journal, and PLOS Medicine. He has delivered more than 700 presentations as invited speaker or session chair in national and international conferences and in seminars in academic or clinical departments throughout the world. He has twice been an advisor to the U.S. President’s Cancer Panel. In 2017, he was again elected as the representative for North America at the Council of the International Epidemiological Association.

Dr. Franco is Fellow of the Royal Society of Canada (2011), the Canadian Academy of Health Sciences (2012), and the Brazilian Academy of Sciences (2013). He has received Lifetime Achievement Awards from the American Society for Colposcopy and Cervical Pathology (2010) and from the International Papillomavirus Society (2015), the Women in U.S. Government’s Leadership Award (2008), the Canadian Cancer Society’s Warwick Prize (2004), and the McLaughlin-Gallie Award from the Royal College of Physicians and Surgeons of Canada (2011). In 2017, he received the Distinguished Service to Cancer Research Award from the Canadian Cancer Research Alliance; the Dr. Chew Wei Memorial Prize in Cancer Research from the University of British Columbia; and the Geoffrey Howe Outstanding Contribution Award from the Canadian Society for Epidemiology and Biostatistics. He was inducted as Officer of the Order of Canada in 2016 and received a Doctor Honoris Causa degree from the Universidade do Porto, Portugal in 2018.

During his tenure at the helm of the Gerald Bronfman Department of Oncology, Dr. Franco has emphasized education as the core mission of the department. He created several new committees and expanded the Chair’s Office to oversee the coordination of postgraduate medical education subspecialties in line with the adoption of the CanMEDS framework by the Royal College. He has also expanded McGill’s horizons on global cancer control by establishing memoranda of understanding with partners in Latin America and Europe. He has taught the EPIB 671 (cancer epidemiology and prevention) course annually since 1992 and has mentored 82 graduate students (48 MSc, 34 PhD), 35 post-doctoral fellows, and 30 undergraduate trainees. In addition to his regular teaching at McGill, he has taught 45 courses on cancer epidemiology and best practices in scientific publishing in Canada, the U.S., Latin America, Europe, Southeast Asia, and the Middle East.

Please join us in wishing Dr. Eduardo Franco good health and continued success as he embarks on a new term, building on the excellence of the Gerald Bronfman Department of Oncology.