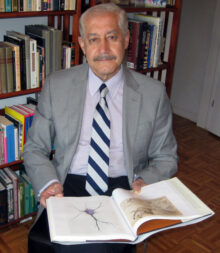 Dr. Carlos Morales, Professor in McGill’s Department of Anatomy and Cell Biology is the 2015 recipient of the Leo Yaffe Award for Excellence in Teaching. The Leo Yaffe award recognizes outstanding and superior teaching contributions in the education and training of undergraduate students in the Faculty of Science.

“I am immensely honored and humbled to have been chosen for the 2015 Leo Yaffe Award, among outstanding professors involved in the education of students in the Faculty of Science,” said Dr. Morales. “This achievement was made possible due to Histology, the discipline I teach in our departmental undergraduate program. Histology is the study of cells and how they form tissues and organs to perform specific functions in a normal state. Students that excel in Histology develop a solid understanding of cellular and tissue biology and acquire a strong analytical tool to think critically when confronted with pathologies that affect genes and distort molecular pathways.”

Dr. Morales first joined McGill’s Department of Anatomy and Cell Biology in 1981 as a postdoctoral fellow. He had obtained a D.V.M. in Veterinary Medicine in 1977 at the Universidad del Nordeste, Argentina. From 1977-1980, he was a postdoctoral fellow at the same university. At McGill, Dr. Morales obtained a Ph.D. in 1984 under the supervision of Yves Clermont. He spent 1985-1987 as a Research Associate in the Biochemistry / Biophysics Program at Washington State University.

Dr. Morales returned to McGill as an Assistant Professor in 1987. He was promoted to Associate professor in 1993, and to Full Professor in 2000.  Throughout his career, Carlos Morales has been known as a superb and admired teacher. For many years he was the coordinator and principal teacher in the undergraduate (B.Sc.) course: Dynamic Histology. He has also played a major role in the Med/Dent teaching, especially teaching the reproductive organs in the Life Cycle Unit.

At the graduate student level, Morales has supervised over 18 M.Sc. students, and 8 Ph.D. students. He has also supervised the research projects of 64 undergraduate B.Sc, students.

He has introduced a variety of teaching innovations, including the development of “digital slides”. To create this computer teaching program, over one hundred of our best histology slides were digitally scanned permitting students to use a computer to “examine” all regions of each slide at all magnifications right up to oil immersion.  The system works extremely well and is eagerly used by the students.

In recognition of his teaching achievements, Dr. Morales was named to the Honor list for Educational Excellence of the McGill Faculty of Medicine in 2004.

Over the course of his research career, Dr. Morales’s interest focused on lysosomes, and especially their sphingolipid activator proteins (saposins) which are required for the lysosomal degradation of glycosphingolipids. He is currently interested in the intracellular transport mechanisms of the above molecules.

Dr. Morales has over 120 peer-reviewed publications and 27 book chapters. He has presented 36 invited talks and organized 11 meetings. For his scientific achievements, Carlos Morales was awarded the special service award of the International. Society of Andrology as well as the Outstanding Service award of the American Society of Andrology in 2001. He was awarded the J.B.C. Grant Senior Scientist Award of the Canadian Association for Anatomy, Neurobiology and Cell Biology in 2005.

Dr. Morales will be presented with a scroll and a monetary award at the Convocation Ceremony on June 2, 2015.