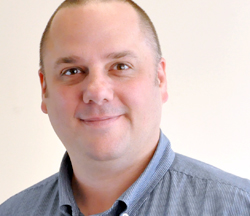 A team led by Jean-François Côté, researcher at the IRCM and adjunct professor in the Department of Anatomy and Cell Biology at McGill University, identified a ‘‘conductor’’ in the development of muscle tissue. The discovery, published online  by the scientific journal Proceedings of the National Academy of Sciences (PNAS), could have an important impact on the treatment of muscular diseases such as myopathies and muscular dystrophies.

“For several years, we have been studying myogenesis, a process by which muscles are formed during embryonic development,” says Jean-François Côté, PhD, Director of the Cytoskeletal Organization and Cell Migration research unit at the IRCM. “During the last step of this process, muscle cells calledmyoblasts align and fuse together to form muscle fibers.”

The fusion of myoblasts is a critical step in the formation of embryonic muscle fibers as it determines muscle size, among other things. This process is also important in adult life because muscle stem cells fuse with existing fibers to achieve muscle growth and help regenerate damaged muscles. However, until now, fusion remained a poorly understood step within the scientific community.