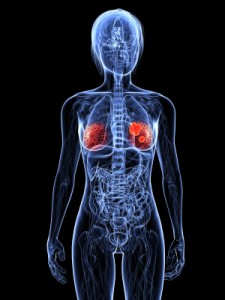 One in eight women will be diagnosed with breast cancer during her lifetime. The earlier cancer is detected, the better the chance of successful treatment and long-term survival. However, early cancer diagnosis is still challenging as testing by mammography remains cumbersome, costly, and in many cases, cancer can only be detected at an advanced stage. A team based in the Dept. of Biomedical Engineering at McGill University’s Faculty of Medicine has developed a new microfluidics-based microarray that could one day radically change how and when cancer is diagnosed. Their findings are published in the April issue of the journal Molecular & Cellular Proteomics.

For years, scientists have worked to develop blood tests for cancer based on the presence of the Carcinoembryonic Antigen (CEA), a protein biomarker for cancer identified over 40 years ago by McGill’s Dr. Phil Gold. This biomarker, however, is also found in healthy people and its concentration varies from person to person depending on genetic background and lifestyle. As such, it has not been possible to establish a precise cut-off between healthy individuals and those with cancer.

“Attempts have been made to overcome this problem of person-to-person variability by seeking to establish a molecular ‘portrait’ of a person by measuring both the concentration of multiple proteins in the blood and identifying the signature molecules that, taken together, constitute a characteristic ‘fingerprint’ of cancer,” explains Dr. David Juncker, the team’s principal investigator. “However, no reliable set of biomarkers has been found, and no such test is available today. Our goal is to find a way around this.”

Dr. Mateu Pla-Roca, the study’s first author, along with members of Juncker’s team, began by analyzing the most commonly used existing technologies that measure multiple proteins in the blood and developing a model describing their vulnerabilities and limitations. Specifically, they discovered why the number of protein targets that can be measured simultaneously has been limited and why the accuracy and reproducibility of these tests have been so challenging to improve. Armed with a better understanding of these limitations, the team then developed a novel microfluidics-based microarray technology that circumvents these restrictions. Using this new approach, it then became possible to measure as many protein biomarkers as desired while minimizing the possibility of obtaining false results.

Juncker’s biomedical engineering group, together with oncology and bioinformatics teams from McGill’s Goodman Cancer Research Centre, then measured the profile of 32 proteins in the blood of 11 healthy controls and 17 individuals who had a particular subtype of breast cancer (estrogen receptor-positive). The researchers found that a subset of six of these 32 proteins could be used to establish a fingerprint for this cancer and classify each of the patients and healthy controls as having or not having breast cancer.

“While this study needs to be repeated with additional markers and a greater diversity of patients and cancer subsets before such a test can be applied to clinical diagnosis, these results nonetheless underscore the exciting potential of this new technology,” said Juncker.

Looking ahead, Juncker and his collaborators have set as their goal the development of a simple test that can be carried out in a physician’s office using a droplet of blood, thereby reducing dependence on mammography and minimizing attendant exposure to X-rays, discomfort and cost. His lab is currently developing a hand-held version of the test and is working on improving its sensitivity so as to be able to accurately detect breast cancer and ultimately, many other diseases, at the earliest possible stage.