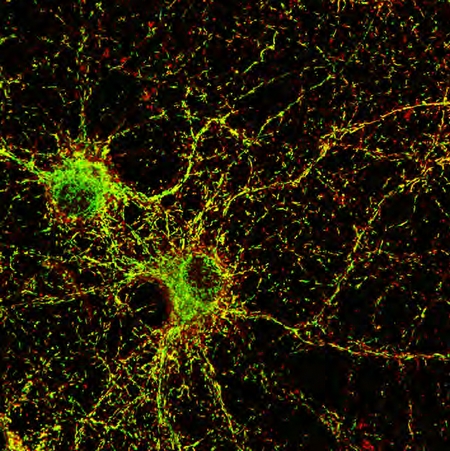 A devastating neurodegenerative disease that first appears in toddlers just as they are beginning to walk has been traced to defects in mitochondria, the ‘batteries’ or energy-producing power plants of cells. This finding by a team of researchers, led by investigators from the Montreal Neurological Institute and Hospital – The Neuro- at McGill University, was published in this week’s issue of the Proceedings of the National Academy of Sciences of the USA (PNAS). The research, which was highlighted as “Novel & Newsworthy” by the American Society for Cell Biology (ASCB), significantly increases understanding of the disease and reveals an important common link with other neurodegenerative diseases, providing renewed hope and potential new therapeutic strategies for those affected around the world.
WATCH THE VIDEO

The disorder, Autosomal Recessive Spastic Ataxia of Charlevoix-Saguenay (ARSACS), primarily affects the cerebellum, a centre for movement coordination in the brain. ARSACS was first identified in the late 1970s in a large group of patients from the Charlevoix and Saguenay regions of Quebec. The incidence of ARSACS in this ‘founder’ population is 1 in 1,500-2,000 births, with a high carrier rate of 1 in 23. ARSACS strikes at an early age. Symptoms, which worsen over time, include poor motor coordination, spastic stiffness, muscle wasting, uncoordinated eye movements and slurred speech. Most patients with the disease are wheelchair-bound by their early 40s and have a reduced life expectancy. ARSACS is not unique to French-Canada as scientists have now found over 100 separate mutations in people worldwide including Japan, Turkey and across Western Europe.

“This finding is the first important advancement in the 10 years since the identification of the mutated gene because it gives an indication of the underlying cellular mechanism of the disease,” says Dr. Bernard Brais, neurologist at The Neuro, “and is a vital first step towards developing therapeutic strategies for ARSACS.” In 2000, scientists identified the gene associated with the disease, called SACS, which produces a massive 4,579 amino acid protein called sacsin, but until now the role or the function of the sacsin protein has been unknown. The multi-institutional collaborative research led by Dr. Brais and Dr. Peter McPherson at The Neuro as well as Dr. Paul Chapple at Queen Mary, University of London indicates that that the sacsin protein has a mitochondrial function, and that mutations causing ARSACS are linked to a dysfunction of mitochondria in neurons.

“By studying neurons in culture as well as in knockout mice (which do not produce sacsin), the team found that loss of the sacsin protein results in abnormally shaped and poorly functioning mitochondria,” says Dr. Peter McPherson, researcher at The Neuro.  This disruption led to defective changes in the neurons and eventual death of the neurons. In the knockout mice, these disruptions led to neuron death specifically in the cerebellum, suggesting that this is the basis for the neurodegenerative impairments suffered by ARSACS patients.

“Mitochondrial dysfunction has also been identified in major neurodegenerative diseases such as Parkinson, Alzheimer, and Huntington diseases,” says Dr. McPherson. “This common link means that research being done on a large-scale on these other diseases may prove critically informative to rarer neurological diseases such as ARSACS, and the inverse may be true, our findings may be fundamental to the study and treatment of other neurodegenerative diseases.”

This research was funded by the Fondation de l’Ataxie de Charlevoix-Saguenay (arsacs.com), created by Sonia Gobeil and Jean Groleau whose two children are affected by this orphan disease. The mission of the foundation is to increase public awareness of the disease and raise funds for research to find a treatment. Support for this study was also provided by the Neuromuscular Research Partnership Program of the Canadian Institutes of Health Research and the UK Medical Research Council. The study was presented at the annual meeting of the American Society for Cell Biology (ASCB) where it was selected for inclusion in the ASCB Press Book as a “Novel & Newsworthy” presentation, and was also highlighted by Nature news blog.