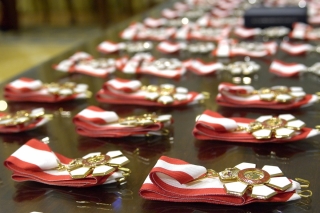 Twelve outstanding individuals associated with McGill, including four associated with the Faculty of Medicine were among 100 new appointments made to the Order of Canada on July 1 by Governor-General (and former McGill Principal) David Johnston.

Recipients will accept their insignias at a ceremony to be held at a later date.

Established in 1967 by Her Majesty Queen Elizabeth II, the Order of Canada is the cornerstone of the Canadian Honours System, and recognizes outstanding achievement, dedication to the community and service to the nation. The Order recognizes people in all sectors of Canadian society. Their contributions are varied, yet they have all enriched the lives of others and made a difference to this country.

Congratulations to all of the new appointees!

For more information about the Order of Canada, click here.