This year marks the 10th anniversary of McGill University’s Life Sciences Complex (LSC), an interdisciplinary biomedical research hub that combines state-of-the-art facilities and imaging equipment across four buildings. To commemorate the milestone, a special symposium was held on December 5, 2018, together with presentations and poster sessions. The article below is one of a five-part series highlighting each of the research themes housed within the LSC. 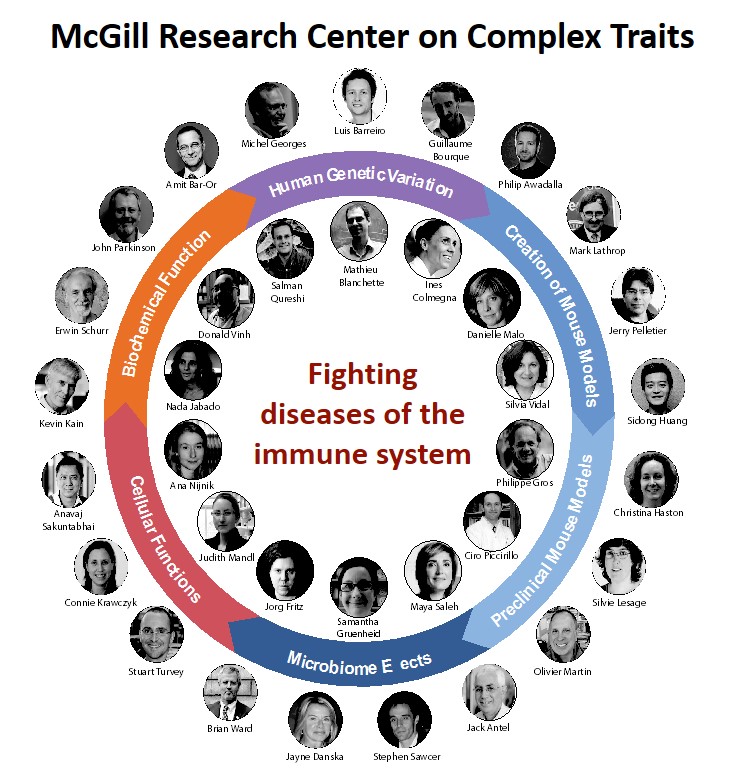 Professor of Human Genetics and Theme Lead for the McGill University Research Centre on Complex Traits (MRCCT), Silvia Vidal was recruited to the LSC in 2003 while it was still in the planning stages. When the doors opened in 2008, she immediately launched an ambitious collaboration that took full advantage of the new facilities. Clinician-scientists, infectious disease specialists and computer scientists from the LSC, the McGill University Health Centre, the Faculty of Science, the McGill Genome Centre, and the University of British Columbia were enlisted and the resulting project led to the discovery of a host of new 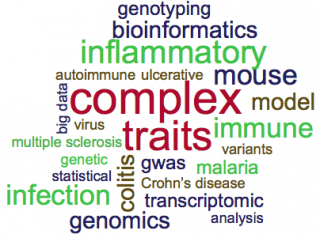 mutations in mouse genes that are now being used to develop molecules to treat diseases like multiple sclerosis, Crohn’s disease, malaria, and other infectious and inflammatory diseases. It was an auspicious beginning, says Professor Vidal. “There are only a few places in the world where it was possible to carry out this very large project, I was very lucky to have been recruited to the LSC,” she says.

For Professor Vidal, the LSC’s exceptional animal facilities are at the core of its success. “The strength of this group is using the mouse model to understand the genetic and immunological determinants of disease so that’s why for us the animal facility is so important,” she explains. “Not only is it state of the art and the animals are kept very clean and in good condition, but there are also specialized facilities which allow us to do different treatments and equipment that allow us to analyse the mouse with advanced imaging techniques that provide critical new insights on pathogenic mechanisms.”

The facilities in turn attract top scientists to the LSC. Professor Vidal cites the example of Assistant Professor in Physiology Judith Mandl, who recently came to the LSC following training first in computational biology in the United Kingdom and then in systems biology and immunology at the National Institutes of Health (NIH) in the United States. “She has been continuously working with world leaders in the development of new approaches and technologies,” says Professor Vidal, “so with her expertise and background, she could have gone anywhere. I do not think she would have come to McGill if the LSC was not as it is.”

In the 10 years since the LSC has been up and running, the Complex Traits group, which in 2015 became the MRCCT, has produced several significant

A discovery by Professor of Biochemistry and Deputy Vice-Principal (Research and Innovation), Philippe Gros, one of the original researchers involved in the creation of the LSC, and his team that an older drug used to treat a rare kidney disorder

called cystinosis is effective as an adjuvant to treat malaria is now in clinical trial.

Professor Maya Saleh and her team have made important advances in our understanding of the interplay between innate immune response, cell death and

inflammation in colitis, obesity and cancer among other conditions.

The LSC continues to seek new ways to improve and foster partnerships between investigators. One recent example is the popular series called LSC Talks Science, launched as part of the LSC’s 10th anniversary celebrations as “a new way to enhance and facilitate collaborations.” Professor Vidal was inspired to initiate one such collaboration after the very first talk, by Assistant Professor of Physiology and member of the Cell Information Systems research theme Arjun Krishnaswamy. Professor Krishnaswamy, who prints his own equipment using a 3-D printer, is developing an instrument that will allow Professor Vidal’s lab to digitally and quantitatively measure the loss of mobility in mice used in multiple sclerosis research.

On the national scene, Professor Vidal is proud of the LSC’s collaboration with Mount Sinai and Sick Kids’ prestigious Centre for Phenogenomics, which provides mouse model lab services to researchers across Canada and around the world. The McGill University Research Centre on Complex Traits is responsible for platforms related to infection and inflammation.

PhD candidate Thiviya Jeyakumar feels lucky to work in this collaborative environment.  “I work on colitis-associated colorectal cancer,” explains Ms. Jeyakumar, who is co-supervised by Professors of Biochemistry Philippe Gros and Nicole Beauchemin. “Even though we’re all technically working on different types of inflammation and infectious diseases, because there are so many Principal Investigators and so many students there is enough overlap that you get to talk about what you’re doing, and borrow experiments and protocols. Everything flows so much easier.”

Ms. Jeyakumar gives a lot of credit for these exchanges to the Complex itself. “The lab bench space is an open space and, compared to other labs I’ve seen, the layout works really well.  The Complex really does benefit student research – I feel like that’s the predominant thing.”

To read more about the Complex Traits theme and some of its research breakthroughs of the past 10 years, click here.