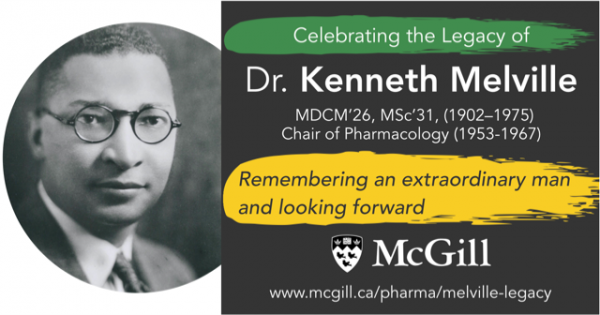 As part of  2019 Black History Month activities at McGill University, the Department of Pharmacology & Therapeutics has joined with several partners to create an event celebrating McGill hero, Dr. Kenneth Melville (1902–1975). Born in Jamaica, Dr. Melville graduated at the top of his McGill Medicine class in 1926 and went on to become Chair of Pharmacology at McGill from 1953 to 1967. Dr. Melville was an accomplished scientist who was deeply involved in his community.

The event will take place on Monday, February 18, 2019 from 6 to 9 p.m. in Room M-1 of the Strathcona Anatomy and Dentistry Building.  The event is free of charge but tickets are required. Visit here for more information and to reserve your spot.

Ahead of the event one of the its organizers Dr. Bastien Castagner, Assistant Professor, Department of Pharmacology & Therapeutics and Canada Research Chair in Therapeutic Chemistry, took some time to answer some questions about Melville, the event itself and his thoughts on the state of diversity.
What was it about Kenneth Melville that inspired you to bring to life his legacy?

He is an unsung hero who I think we need to celebrate and remember, not only because he was a great scientist and a great educator, but also for his involvement in his community. He could have decided to keep a low profile, but he took advantage of his position to fight against discrimination for instance.

Can you tell us a little about who is going to be speaking at the event, what they’ll talk about, and the people behind the organization of the event? Who is this event open to?

We have the great pleasure of hosting Dr. Christopher Wright, who is Dr. Melville’s grandson, and an accomplished physician himself. Frank Baylis, a successful entrepreneur and politician will also be with us. Importantly, we will also have a recent McGill graduate, who will share her experience as a student. The idea is to talk about who Dr. Melville was, what he represents, and how to move forward, because we are still not where we should be in terms of diversity.

This is an event jointly organized by the Department of Pharmacology & Therapeutics, the Jamaica Association of Montreal, the Faculty of Medicine’s Social Accountability Engagement Office and Shanice Yarde, Equity Advisor. It is open to everyone who wants to hear about Melville’s story and be inspired to continue his fight.

What are some of the contributions Melville made to the field of Pharmacology?

He contributed to the effect of drugs on coronary circulation. He published a large number of papers up until the time he passed away, because he was still active.

Melville was also a social and political advocate, when he didn’t have to be. So many in his position, who “made it”, could have stood back and not been active on the issues of the day. Do you think he suffered any setbacks due to his advocacy?

He was certainly of the right side of history long before a majority, notably in fighting discrimination in the 1930s. Dr. Melville was chair of the fundraising committee to support the fight of Fred Christie, a Montrealer, against the York Tavern, which had refused to serve him simply because he was Black. This fight took years and went all the way to the Supreme Court, where they lost. This was very hard on Christie and we can only assume it was the same for Melville. It took another 24 years before Quebec enacted laws that would forbid this type of discrimination.

As a person who is not directly affected by the type of discrimination Melville addressed, can you talk about the important role that allies play in standing alongside marginalized communities?

Perhaps especially since I have been privileged, it is easy to sleep at the wheel and be completely oblivious. When we don’t pay attention, I think we are not only unhelpful but we contribute to the system. I am in a position where I can make things move so it is important to listen a lot to those who know, and to be proactive if we want to make things change.

Pharmacology and Therapeutics recently launched a graduate research bursary for an underrepresented student. Can you tell us about this initiative?

This bursary aims at rewarding excellence in students from underrepresented equity groups and offers an undergraduate research internship in a laboratory. This type of research experience is important in the career development of students. Ideally, we would like to convince them to continue in graduate school to become successful scientists like Melville was.

How do you feel we are doing today with the inclusion of Black people in academia, when compared to the past? Are things markedly better? If not, why is that and what should we do to better the situation?

It is clear that we are not where we should be in terms of representation. We can congratulate ourselves for accepting Dr. Melville and many more Black students as early as the beginning of the 20th century, but everything was not rosy then and we should do better now. This will be discussed at the event. I am looking forward to hearing what people have to say. I think interesting and difficult questions will be raised.

Visit https://www.mcgill.ca/pharma/melville-legacy for more information and to donate to the Melville Bursary for underrepresented equity groups.