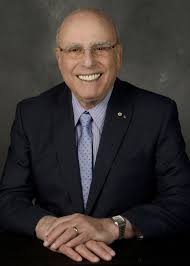 One hundred years ago Albert Einstein published the General Theory of Relativity, changing the world forever. To celebrate the centennial anniversary of this historic milestone, the Canadian Friends of Hebrew University has developed the Einstein Legacy Project, an ambitious global initiative to inspire the next generation of brilliant minds and bring fresh thinking to the problems facing our planet.
Genius: 100 Visions for the Future brings together a collection of 100 of the world’s foremost thought leaders, each asked to provide a visionary statement within the world’s first entirely 3-D printed book, printed and bound in one piece. The book’s 100 single-sided pages are laser-cut and formed in the silhouette of Einstein. The prototype for this limited edition book was recently printed 400km above the Earth onboard the International Space Station.

Included among the 100 distinguished luminaries asked to contribute to this initiative is the McGill Faculty of Medicine’s own Dr. Phil Gold, the Douglas G. Cameron Professor of Medicine and Professor of Physiology and Oncology. Dr. Gold, who also had the opportunity to join many of his fellow contributors, dignitaries and youth at a launch event unveiling the book held in Montreal on September 10, focused his contribution on the important role that thinking outside the box plays to groundbreaking discovery.

“As Einstein famously said, ‘Imagination is more important than knowledge,’” writes Dr. Gold.  “Imagination will devolve into new ideas and approaches to old problems utilizing the concepts and technologies at hand. In this regard, then, it could said that if one is looking for a needle in the haystack, regardless of the era, first find a way to remove the haystack.”

The Inaugural Director of the Goodman Cancer Research Centre (then known as the McGill Cancer Centre), Dr. Gold’s early research led to the discovery and definition of the Carcinoembryonic Antigen (CEA), the blood test most frequently used in the diagnosis and management of patients with cancer. For this work, other studies, and his outstanding contributions as a medical educator, he has gained national and international recognition.

Over the course of his illustrious career Dr. Gold has received numerous prestigious awards, he has received a number of honorary degrees and he has been elected to a wide-range of organizations including the Royal Society of Canada and the American Society for Clinical Investigation (ASCI). His outstanding contributions to teaching have been recognized by an award as a Teacher of Distinction from the Faculty of Medicine. He has been honored by his country, his province, his city and his university by appointment as a Companion of the Order of Canada, an Officer of l’Ordre National du Québec, a member of the Academy of Great Montrealers (now a Member of the Order of Montreal) and a recipient of the Gold Medal of the McGill University Graduate Society, respectively.

In 2006, the Phil Gold Chair in Medicine was inaugurated at McGill University, and the first incumbent was selected in 2009.  He was inducted into the Canadian Medical Hall of Fame in 2010.  He received the Life Time Achievement Award from McGill University in October 2011. In 2012, Dr. Gold was inducted as an Honorary Member on the International Golden Key Society; he received the Gerald Bronfman Center Lifetime Achievement Award, Department of Oncology, McGill University and received the Queen’s Diamond Jubilee Medal. In 2013 he was the recipient of the Wilder-Penfield, Prix du Québec. An Early Career Chair was also established in his name at The Weizmann Institute, and he has been honoured at Boys Town, Jerusalem.

Congratulations Dr. Gold on this most recent honour!