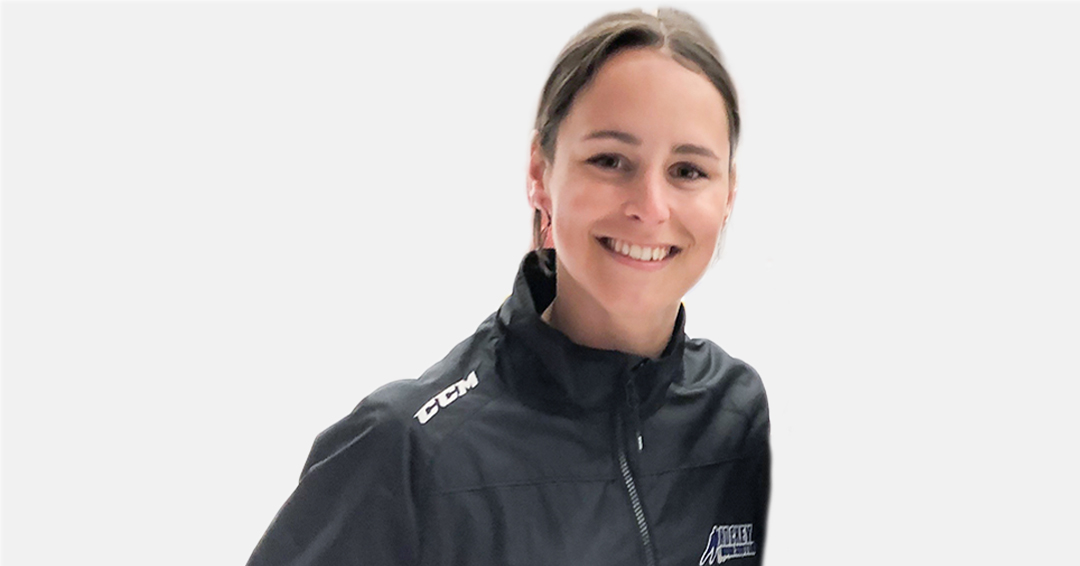 Laura Baikie, NunatuKavut from Goose Bay, Labrador, graduated with her MSc (Applied) in Physical Therapy from McGill in the Spring of 2022. We checked in on Ms. Baikie, who is now practising  at a private clinic in the Halifax area, to hear about her new job, her rewarding role as a hockey coach for Indigenous girls and what the National Day for Truth and Reconciliation Day means to her.

Why did you choose to study physiotherapy and why at McGill? I’ve wanted to be a physio since I was very young. I knew about McGill being world-renowned and a great academic school. Also, there’s only one physiotherapy school in Atlantic Canada, and so Montreal was the next closest, so at least I wasn’t too far away from home.

Coming from a smaller community, was it hard to adjust to city life in Halifax, where you did your undergrad, or Montreal? I definitely had a bit of culture shock when I moved to Halifax, but then coming to McGill was actually a really good culture shock. I got to learn so much about other peoples, cultures and where everyone is coming from. Some of our class were first or second generation immigrants, and that was something that I didn’t see a lot, so I thought that was amazing.

Did you avail yourself of any of the resources at McGill for Indigenous students? Yes, First Peoples’ House. After the information came out from the residential schools, we had a gathering and that was really helpful to process those emotions because I’m away from my community and I was able to at least be a part of the one at McGill and we kind of leaned on each other. That was really important at that time.

How would you describe your experience at McGill, in general and as an Indigenous student? I’m very grateful for all the knowledge and experience that I got in school because now I can bring that back to my community and I get to share what I’ve learned and use it to better the health and wellness of our girls – I work mostly with younger girls.

I had a good experience at McGill, but I was the only Indigenous student in my program that I knew of – I know of one student in the year below me. Since I started my undergrad five years ago I wasn’t necessarily lonely but I definitely was fully aware of how there are just not enough Indigenous students in programs like physiotherapy or occupational therapy, or other health professions, even though they would be such a great asset in our communities.

Do you have any suggestions for ways the Faculty or SPOT could make Indigenous students feel more welcome? It’s a hard question. I wish I knew exactly what could be done. It starts pretty early, trying to get into these tough master’s programs, so promoting in the communities or bringing someone who is Indigenous and a physiotherapist into these communities to show the routes that are possible. I think just having that representation is important. And right now there’s just not enough Indigenous physiotherapists across Canada to show that representation.

I understand you play and coach hockey. Can you tell us a little bit about that? I used to play at the National Aboriginal Hockey Championships, an annual tournament for high school age students. Now I’m the trainer on that team representing Team Atlantic. I’m also coaching the Female Indigenous  Hockey Program, which is awesome. We supply equipment, ice time, coaching, and it’s for anyone who’s either learning to play hockey or any girls who want to come out for free ice time. I’m in Nova Scotia, which is also known as Mi’kma’ki, so most of the girls who are coming out are Mik’maq, but it could be anyone who identifies as Indigenous in the area and wants to attend.

Do you see yourself acting as an ambassador to try to encourage more Indigenous students to give physio a try? I’m just starting, but I do want to put myself out there to do that eventually. Right now, whenever I’m coaching girls or at a tournament with them, I drop little hints. I’ll ask “What are you doing in college next year? You know, I went to physio school,” and I tell them what it was like and they often ask. Actually, I have no idea if this is due to me at all, but a girl I coached a few years ago is in her undergrad now and she wants to pursue physiotherapy. It’s good to see another girl doing that.

Do you have any advice for health care practitioners who work with Indigenous populations? If you’re a non-Indigenous person and you’re working in Indigenous communities or with Indigenous patients, reach out to people who are already in roles that can help, such as someone at the local Friendship Centre who might know this patient already, or might know the people in the community and resources that they could refer them to. Then you’re more knowledgeable about their situation, and you’re also not trying to educate on something that you might not necessarily actually know about.

What does the National Day for Truth and Reconciliation mean to you, as an Indigenous person and as a health care professional? In light of all the information that we have been given in the last few years, and seeing how generational trauma can directly affect health status, in our role as health care practitioners, we should ask: “How can I address barriers in accessing health care specifically in my field?” Promoting what we do and reaching out to the right places can be a good start. I’m happy to be promoting health and wellness, because improving health and access to resources can affect things that have happened in the past and it can bring us towards a better place.

As much as we want to recognize the past with truth and reconciliation, it’s also important to highlight what’s possible and all the good things that are going on right now. Being someone who’s Indigenous and is already a physiotherapist, that’s awesome. And then, thinking about the future, all the opportunities that are possible for Indigenous people and to help Indigenous people heal through this process.