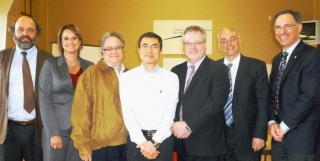 Jacques Boissonneault, President and Director General of Abitibi-Témiscamingue’s Agence de la santé et des services sociaux, is pleased with the interactions. “We were very happy with the earnest participation of physicians from the CSSS Vallée-de-l’Or,” he said following the most recent visit in May 24, 2013 by RUIS McGill President and Dean of McGill’s Faculty of Medicine, David Eidelman and other RUIS McGill members.

In 2014, Abitibi-Témiscamingue will play host to the second RUIS McGill Symposium, following the success of the 2012 event.  More details to follow!