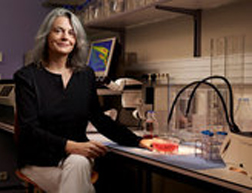 The Scientific Director of the Douglas Mental Health University Institute Research Centre, Professor Brigitte Kieffer, will receive the L’Oréal-UNESCO For Women in Science Award in a ceremony to take place on March 19, in Paris. This award, bestowed by the L’Oréal Foundation and by UNESCO, recognizes the exceptional career paths and contribution of women scientists worldwide. Brigitte Kieffer has been selected as the winner for Europe for her research at the Institut de génétique et de biologie moléculaire et cellulaire (IGBMC), in Strasbourg. Four other women scientists will receive this prize, one from each continent.

Brigitte Kieffer’s work has paved the way for a better understanding of the brain mechanisms involved in pain, mental illness and drug addiction. In 1992, Prof. Kieffer succeeded in cloning and isolating the gene for an opioid receptor in the brain that plays a key role in alleviating pain, a puzzle which scientists around the world had been trying to solve for over 15 years. Her findings have laid the foundations for new treatments for pain, addiction, and depression.

“We are proud that a scientist of such international stature has chosen to take on the leadership of the Research Centre, providing great promise for new breakthroughs in mental health,” said Lynne McVey, RN, MSc., Chief Executive Officer of the Douglas Institute.

Newly arrived at the Douglas Institute Research Centre in January of this year, Brigitte Kieffer will pursue her research while directing a team of over 300 people. She also holds the Monique H. Bourgeois Chair in Pervasive Developmental Disorders at the Faculty of Medicine of McGill University, in addition to a position as professor in the Department of Psychiatry.

The candidates for the L’Oréal-UNESCO For Women in Science Awards were nominated by a network of more than 1,000 international scientists. Among them, five winners were selected by an independent jury composed of twelve eminent members of the international scientific community, chaired by Professor Günter Blobel, Nobel Prize in Medicine.