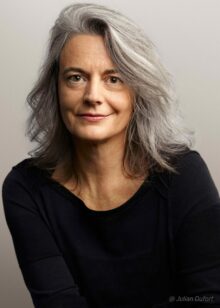 Dr. Brigitte Kieffer, Professor in the Department of Psychiatry at the Faculty of Medicine at McGill University and Scientific Director of the Douglas Mental Health University Institute, was appointed an officer of the French National Order of Merit during a ceremony held in Montreal on May 19. The National Order of Merit recognizes the distinguished service of French citizens in translating the dynamism of society, being a positive role model and recognizing diversity.

“This distinction is a great honour for me,” says Dr. Kieffer, who is also the holder of the Monique H. Bourgeois Chair in Pervasive Developmental Disorders at McGill University and the Canada Research Chair in Neurobiology of Addiction and Mood Disorders. “It is also a tremendous recognition of the efforts made by all the members of my team, past and present, over the course of 25 years of research. Our work has already had important implications towards our understanding of the molecular mechanisms involved in pain, addiction and depression and will, I hope, have concrete implications for the treatment of these diseases.”

Dr. Kieffer’s research on opioid receptors is recognized internationally. By isolating the first gene encoding such a receptor, it opened up the field of exploration of the molecular mechanisms underlying nociceptive responses, as well as behaviors related to reward processes and responses to stress.