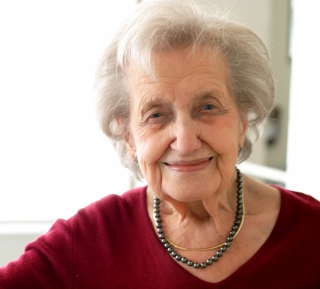 Dr. Brenda Milner, an active researcher at the age of 95 at the Montreal Neurological Institute and Hospital – The Neuro, McGill University, is a recipient of The2014 Kavli Prize in Neuroscience. The Norwegian Academy of Science and Letters announced the 2014 Kavli Prize laureates in Astrophysics, Nanoscience and Neuroscience in live webcasts today from Oslo, Norway and the World Science Festival in New York. The Kavli Prize in Neuroscience is awarded for outstanding achievement in advancing our knowledge and understanding of the brain and nervous system.

Dr. Milner, the Dorothy J. Killam Professor of Psychology, is widely recognized as one of the founders of cognitive neuroscience–the field that brings together brain and behavior.  “I am thrilled to receive The Kavli Prize in Neuroscience with Dr. John O’Keefe and Dr. Marcus E. Raichle,” said Professor Milner.  “I express my sincere gratitude to The Norwegian Academy of Science and Letters, The Kavli Foundation (US), The Norwegian Ministry of Education and Research, as well as the review committee for this wonderful honour.”

The Kavli Prize recognizes scientists for their seminal advances in three research areas: astrophysics, nanoscience and neuroscience. The prize consists of USD $ 1 million in each of the scientific fields. In addition to the prize money the laureates receive a scroll and a gold medal. The Kavli Prize is awarded every second year by The Norwegian Academy of Science and Letters. The Kavli Prizes will be awarded on September 9 in the presence of His Majesty King Harald. The ceremony will be hosted by Alan Alda and Haddy N’jie.

“On behalf of the McGill community, I congratulate Prof. Milner and thank the Norwegian Academy of Science and Letters, The Kavli Foundation (US) and The Norwegian Ministry of Education and Research. Prof. Milner is a luminary and receiving the Kavli Prize is a tribute to her distinguished career and seminal discoveries of memory systems.” said Prof. Suzanne Fortier, Principal and Vice-Chancellor of McGill. “We are so very proud that she continues to be recognized as a pioneering scientist on the international stage.”

“Prof. Milner’s rigorous studies of amnesic and other patients transformed the way we think of memory.  The Kavli Prize in Neuroscience is a wonderful honour for Dr. Milner and recognition of a lifetime of dedication to understanding human cognition,” said Dr. Guy Rouleau, Director of the Montreal Neurological Institute and Hospital of McGill University and the McGill University Health Centre.

For more than six decades, Dr. Milner’s creativity and precision in developing methodology to study amnesic and other patients have led her to conclusions that radically changed the way we think about memory.  Nobel Laureate Eric Kandel credits Dr. Milner with taking the critical step of merging the fields of neurobiology and psychology to form this new field that has spawned a vast body of research in human cognition. Importantly, her research has also had a profound and continuing influence on clinical domains in the development of tests to assess, diagnose, and treat people with brain disorders resulting from traumatic injury and degenerative diseases, and from psychiatric illness.

In 2009, Dr. Milner announced the creation of The Brenda Milner Foundation, which underpins her commitment to future scientists and provides opportunities for those around the world to experience the dynamic academic and clinical environment at The Neuro. The Foundation will support and foster young researchers in the field of cognitive neuroscience through postdoctoral fellowships at The Neuro.

Brenda Milner’s scientific contributions have been recognized by more than 20 honorary degrees and many prestigious awards from Canadian and international scientific societies. She is a fellow of the Royal Society (UK), the Royal Society of Canada and the National Academy of Sciences (USA), and has received, among others, the Dan David Prize, the International Balzan Prize, the Pearl Meister Greengard Prize and the NSERC Award of Excellence.

For more information on The Kavli Prize and laureates:  http://www.kavliprize.no/