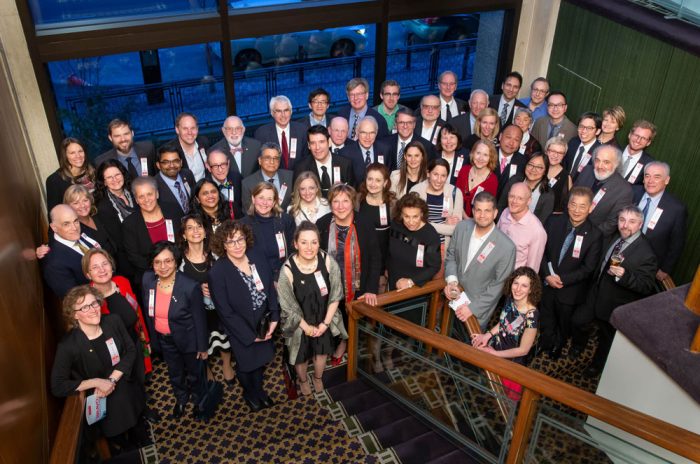 “We will celebrate award recipients today, but I think we should also remember that these awards come as a result of a very stimulating and supportive environment that has been provided by the McGill community,” said Professor Tomislav Friščić, who delivered the keynote speech at the Bravo gala on March 21.

The annual event, hosted by McGill’s Research and Innovation, welcomed approximately 250 guests, including researchers and their families and friends, faculty members, students, as well as members of McGill’s academic leadership – all of whom came together to celebrate researchers and scholars across disciplines who won major provincial, national and international prizes and awards in 2018.

Principal and Vice-Chancellor Suzanne Fortier was one of the 90 laureates honoured at the gala for her appointment as an Officer of the Order of Canada in 2018. Although Principal Fortier was not able to attend the gala, she sent a congratulatory message to the laureates present: “I would like to take a moment to thank all of the researchers present this evening for your commitment to research excellence. Your work shines not only here in Montreal, but in Canada and around the world. Thank you.”

In her remarks, Martha Crago, Vice-Principal (Research and Innovation) and Bravo Master of Ceremonies, thanked McGill community members who continuously support the successes of researchers at McGill: “As always, I remain very grateful to every member of our community who nominated, promoted and otherwise supported the success of the laureates we are honouring tonight. Prizes and awards often have significant administrative requirements, and I thank everyone who offers their time and energy to submit nominations for our colleagues—in particular those in the Office of Sponsored Research.”

Fuelling the drive to be better

In 2018, Prof. Friščić received four prestigious awards for his exceptional contributions to green chemistry research, which aims to develop cleaner, faster and more diverse approaches to chemical research and manufacturing, including: the Steacie Prize for Natural Sciences, the third McGill professor to win the prize, and the first ever McGill professor to win it for chemistry, the Rutherford Memorial Medal in Chemistry, and induction into the Royal Society of Canada’s College of New Scholars, Artists and Scientists. He was also a participant at the World Economic Forum Meeting of the New Champions.

“An award is an inspiration,” said Prof. Friščić. “It is the fuel that powers us to continue to do new things and to be better at what we do. It is also really important that when we receive this inspiration, we use it to help other people.”

A short video (see below) was screened during the gala, featuring five prizewinning researchers speaking about the positive impact of prizes and awards on their work and about the importance of recognition at McGill University. The highlighted researchers included: