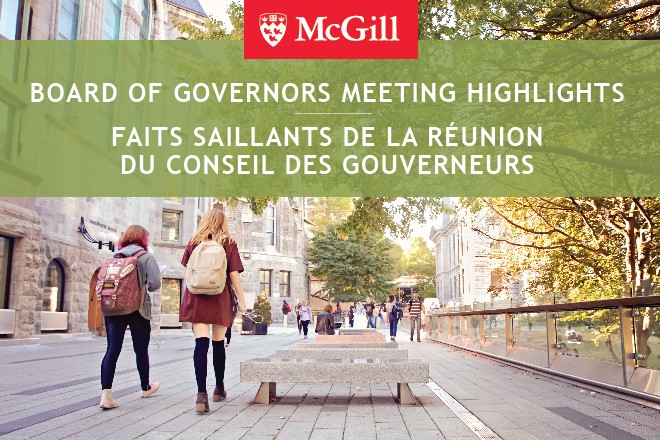 The full minutes of the meeting’s open session will be available following approval at the Board’s next meeting, on May 23, 2019. In the meantime, we would like to share with you the meeting’s important discussions, decisions and developments.

During the meeting’s closed session, the Board approved the promotion of seven Associate Professors to the rank of Full Professor. The McGill Reporter will publish the names of the new appointments after the candidates have been notified.

On the recommendation of the Finance Committee, the Board approved the University’s budget for FY2019-2020. The anticipated revenues are in excess of $920M, while expenditure estimates are in excess of $928M. The University’s major commitments include the application of the annual salary policy, as well as support from unrestricted funds towards deferred maintenance of facilities and information technology infrastructures. The University is also committed to funding strategic priorities, including initiatives in Indigenous Studies and Education, the Student Wellness Hub, increased student aid, and investments in graduate student funding and doctoral student recruitment. At the same time, the University is working with institutional stakeholders to monitor and control other unrestricted expenditures. The full Budget Book, once finalized, will be posted on the Provost’s website.

The Board approved the Building and Property Committee’s recommendation to go ahead with two redevelopment projects:

Further to the Board’s special meeting of April 11, 2019, during which the Board endorsed the Principal’s decision to cease using the Redmen name in reference to McGill’s men’s varsity teams, the Principal spoke about how the coming months present an opportunity for the community to come together and engage in the process to choose a new team name that honours our long history and tradition of athletic achievements and excellence.

The new Quebec government has adopted the university funding policy that was put in place in May 2018 by the previous government, with a few small adjustments linked to international enrolment, in particular as it relates to infrastructure funding. The changes, however, will not affect the envelopes for deferred maintenance and heritage buildings. McGill receives a significant share of these envelopes.

The federal government extended its Strategic Investment Fund for Postsecondary Education to the end of December 2020.

In the run-up to the federal election, McGill’s senior leadership is working with the U15 and Universities Canada in engaging with all the major parties about the importance of research funding, student support and research infrastructure.

The Principal participated in meetings of Universities Canada and the American Association of Universities (AAU). At both meetings, the topic of security, particularly cybersecurity, was a main item on the agenda.

The Canadian Forces Liaison Council honoured McGill with its Award of Excellence in recognition of the University’s support of employees who serve in the Canadian Army Reserves.

On April 7, the Principal joined UBC President, and McGill alumnus, Santa Ono, to announce the Peterson-Wesbrook Scholars Program, which will provide mobility funds for student exchanges between McGill and UBC.

On March 26, the Principal gave a presentation to the Conseil des relations internationales de Montréal (CORIM)entitled “The Role of Universities in a World Undergoing Profound Change.”

In early April, Principal Fortier and Vice-Principal Weinstein joined John and Marcy McCall MacBain at a series of events across Canada to promote awareness of the McCall MacBain Scholarships program at McGill.

More than 7,600 students will graduate at this year’s ceremonies, which will be held from May 28 to June 4 downtown, and on June 5 at Macdonald Campus. Fourteen outstanding individuals will receive honorary degrees.The Principal encouraged Board members to participate in these joyful celebrations.

La Presse named Prof. Daryl Haggard a “Personnalité de la semaine” for her role in the global collaboration that used the Event Horizon Telescope to capture the first-ever images of a black hole.

The Canadian Society for Chemistry honoured Professors Tomislav Friščić and Jean-Philip Lumb, respectively, with the 2019 Award for Research Excellence in Materials Chemistry and the 2019 Keith Fagnou Award.

The Board received the annual report from the Joint Executive and Senate Steering Committee. The Committee selected the topic for this fall’s joint meeting of the Board of Governors and Senate: “How Can McGill be a Model of an Open and Connected University?” The joint meeting will be held November 14, 2019.

Secretary-General Edyta Rogowska presented the Annual Report on Safe Disclosure (“Whistleblowing”) for January 1, 2018, through December 31, 2018. The report will be presented to Senate on May 15, 2019.

Prof. Brenda Ravenscroft, Dean of the Schulich School of Music, presented an informative overview of the School’s teaching, learning and research activities.