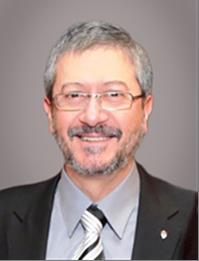 It is our pleasure to announce the appointment of Dr. Eduardo Franco to the position of Chair, Department of Oncology, Faculty of Medicine, McGill University, effective August 1, 2013. Dr. Franco has been serving in this role in an interim capacity since January 2011.

Dr. Franco is a James McGill Professor in the Departments of Oncology and Epidemiology, Biostatistics and Occupational Health, in addition to holding the position of Director, Division of Cancer Epidemiology. Prior to joining McGill in 1995 he was a faculty member at the Université du Québec and a senior researcher and head of the Epidemiology Unit at the Ludwig Institute for Cancer Research in Sao Paulo, Brazil.

Dr. Franco holds undergraduate degrees from Universidade de Campinas, Brazil, and master’s and doctoral degrees in public health from the University of North Carolina at Chapel Hill. He was a guest researcher at the U.S. Centers for Disease Control in Atlanta and a post-doctoral fellow in cancer epidemiology at the International Agency for Research on Cancer in Lyon, France, at the U.S. National Cancer Institute in Bethesda and at Louisiana State University in New Orleans.

Dr. Franco’s research during the last 28 years has focused on an array of topics, including: molecular epidemiology and prevention of cervical cancer and human papillomavirus-associated diseases; cancers of the upper aero-digestive tract; prostate, endometrium, and childhood tumours; studies of epidemiologic methods for evaluating efficacy of cancer screening strategies; the impact of measurement error in epidemiology; and studies of societal and clinical influences on cancer patient survival. Much of his research has been international, with collaborative projects in Canada, Brazil, the Congo Republic, the United States and with the International Agency for Research on Cancer in France.

Dr. Franco has published 376 scientific articles and 55 book chapters, edited two books on cancer epidemiology and prevention, and co-edited 10 journal supplement issues. He has delivered close to 600 presentations as invited speaker or session chair in national and international conferences and in seminars in academic or clinical departments throughout the world. He is the Editor-in-Chief of Preventive Medicine and has served on the editorial boards of a number of other prestigious biomedical journals. He has twice been an advisor to the U.S. President’s Cancer Panel. He was an elected representative (2002-05) for North America in the Council of the International Epidemiological Association, which he has represented on the Joint Policy Committee of the Societies of Epidemiology since 2011.

Dr. Franco has been the recipient of numerous awards. He became a Fellow of the Royal Society of Canada in 2011 and of the Canadian Academy of Health Sciences in 2012. In 2010 he was honoured with the Lifetime Achievement Award by the American Society for Colposcopy and Cervical Pathology. In 2008 he received the Women in U.S. Government’s Presidential Leadership Award.

As Chair of McGill’s Department of Oncology, Dr. Franco’s vast knowledge, experience and leadership skills will play a vital role in ensuring the Department remains a leader in its field.

Please join us in formally welcoming Dr. Eduardo Franco to this position and in wishing him continued success in building on the Department’s excellence and enhancing its national and international reputation.