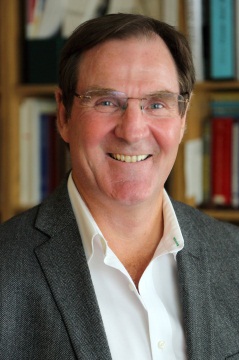 Dr. Alan Evans has become the latest researcher to receive the Province of Quebec’s most prestigious scientific award, the 2016 Prix Wilder-Penfield, named after The Neuro’s founder.

Each year since 1977, the Government of Quebec has bestowed awards known as the Prix du Québec on exceptional citizens. At present, there are five scientific and six cultural awards. The Prix Wilder-Penfield is awarded to a researcher in the biomedical field whose career has shown clear evidence of outstanding, innovative work on an international scale.

Dr. Alan Evans is James McGill Professor of Neurology, Psychiatry and Biomedical Engineering at McGill University, Scientific Director of the Ludmer Centre for Neuroinformatics & Mental Health, and a principal investigator and former head of The Montreal Neurological Institute’s McConnell Brain Imaging Centre (BIC), where Canada’s first PET scans, MR images and CT scans were produced. After earning his PhD in biophysics at the University of Leeds (UK), he worked for five years at Atomic Energy of Canada before joining The Neuro in 1984.

In recent years, Dr. Evans has served as the head of the data-coordinating centre for a major international study of paediatric brain development funded by the U.S. National Institutes of Health. The project introduced innovative technology to create a mass of brain data freely available on the web. This database technology is now used, for example, in international studies of abnormal paediatric development and Alzheimer’s Disease (AD). In a recent study, Dr. Evans’ laboratory analyzed more than 7,700 brain images from 1,171 subjects to reveal the importance of early vascular pathology in AD progression.

“The study of the brain is being transformed by new advances in information science, imaging, genetics and wearable technology,” says Dr. Evans. “Converting this wealth of data into knowledge demands sophisticated analytic approaches, but the pay-off in increased understanding of brain health and disease is well worth the effort.”

An author or co-author of more than 500 scientific papers, Dr. Evans has held many leadership roles in addition to the BIC.  He is a founding member of the International Consortium for Brain Mapping (ICBM), and a founder of the Organization for Human Brain Mapping (OHBM). He served as Chair of the Fourth International Conference on Human Brain Mapping in 1998. He is a Principal Investigator of the Montreal Consortium for Brain Imaging Research (MCBIR), which links the BIC with six other institutions that investigate brain development, aging, addiction and various aspects of cognitive neuroscience.

He is a founding member of the International Consortium for Brain Mapping (ICBM), a network of top neuroimaging sites; and a founder and current Chair of the Organization for Human Brain Mapping (OHBM), the principal worldwide community for brain-imaging research. Dr. Evans is also Scientific Director of Healthy Brains for Healthy Lives, a McGill University neuroscience initiative funded by the Canada First Research Excellence Fund. Dr. Evans’ work is in the top one per cent of highly cited researchers in neuroscience and behaviour.

Dr. Evans is also founder and director of Biospective Inc., a commercial company that offers 3D-image analysis for pharmaceutical studies.

He is the fifth member of The Neuro to be honored with the Prix Wilder-Penfield following Guy Rouleau (2012), George Karpati (2006), Frederick Andermann (2003) and Brenda Milner (1993, inaugural award).