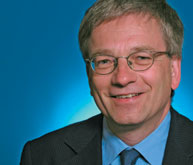 Already six months have passed since I became chief scientist! Now that the three scientific directors have been chosen, the team is complete with Maryse Lassonde at the Fonds Nature et Technologies, Normand Labrie at the Fonds Société et Culture and Renaldo Battista at the Fonds Santé. These exceptional team members are joined by Administrative Director Pierre Prémont, Communications and Knowledge mobilization Director Benoit Sévigny and Ethics and Legal affairs Advisor Mylène Deschênes. The three Fonds remain focused on the excellence and competitiveness in research and of the next generations of researchers here and abroad. Two key words drive our actions: intersectoriality and partnership.
Universities tour

My tour of Québec universities is coming to an end. At the start of the year, Maryse Lassonde joined Ramia Jabr, my assistant, and I. Quite impressive! I am very fortunate to have the opportunity to meet with highly motivated researchers and students in all sectors. Internationally competitive niches of excellence are under development across the province, and it is up to us to find the resources required to ensure their continuation and long-term success.

Throughout the network, researchers and students have shown great interest in intersectoral research development, which, however must not be carried out at the expense of independent research. Furthermore, it is essential that the Fonds programs be flexible enough to account for regional and sectoral differences. The team is currently implementing mechanisms that take this most important observation into consideration.

Funding for young researchers was also a key point raised during our visits. Supporting the next generations of researchers constitutes a priority for the Fonds, as exemplified in our recent initiative to value the contributions of students through the Étudiants-chercheurs étoiles Awards competition, and we are also exploring options to help launch the careers of young researchers. Closer partnerships with universities are vital to the success of our programs. Finally, renewed funding for large research platforms and infrastructures such as databases remains a concern shared by most of the universities we visited, especially in light of the withdrawal of federal granting councils. I therefore assembled an inter-Fonds committee with members from the three boards of directors so that they may recommend by fall a creative strategy to the government and its partners in order to secure long-term funding for the equipment and tools that are vital to maintaining and increasing the competitiveness of Québec researchers in Canada and around the world.

The call for intersectoral research project proposals was a great success. In fact, over 65 proposals have been submitted to date. Each of Québec’s universities are represented along with colleges and private institutions. I would like to thank all of the researchers and teams that took part in the initiative. Just as we had hoped, the proposals are wide-ranging and involve most of the research areas covered by the three Fonds, including sustainable development, population ageing, the Plan Nord, green cities, the role of art and culture in our society, front-line health care, mine exploration and mineral processing, ICT, green chemistry and the pharmaceutical industry, to name only a few. A committee made up of members from the three boards of directors and the scientific directors is currently developing a funding strategy based on the proposals we have received. I will inform you of the next steps over the course of the next few months.

I am thrilled with the student community’s response to the Étudiants-chercheurs étoiles Awards competition. The three Fonds have received a total of 203 applications: 82 by the Fonds Nature et Technologies, 76 by the Fonds Santé and 45 by the Fonds Société et Culture. The Fonds are currently carrying out their eligibility and evaluation processes. The names of the six winners from each Fonds will be announced starting mid-April on the Web site of the FRQ. The second competition will start in May.

Leading research and scientific excellence go hand-in-hand with research integrity. The three Fonds de recherche du Québec are committed to supporting ethical research conducted with honesty and intellectual rigour. Our position on the topic is clear, most notably in our Common Rules and Regulations. We also recommend that you read the new Tri-Agency Framework: Responsible Conduct of Research (2011).

In the next few months, the boards of the directors of the Fonds will begin to outline their respective 2013-2016 plans, which must account for Québec’s third Research and Innovation Strategy (QRIS-3). Work on QRIS-3 priorities is set to get underway soon, and the FRQ will play a key role. Consultations with members of the academic community, partners and those who use the research results will be carried out to ensure that the major directions that will guide the actions of the Fonds and QRIS-3 are in line with sector needs and realities. I will keep you informed of progress of the work.