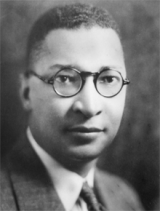 Born and raised in Kingston, Jamaica, Melville, who came to Montreal in the early 1920s, is remembered as the first black medical student at McGill University. He graduated at the top of his class, earning the Holmes Gold Medal for his year, and, in 1930, won a postdoctoral fellowship at the prestigious Pasteur Institute in Paris.

In 1953, he became the first (and only) black Chair of McGill’s Department of Pharmacology & Therapeutics—and the first person from a developing country to hold a Chair at McGill.

Throughout his career, Melville served as a mentor to students from the developing world, a leader in Montreal’s West Indian community, and an advocate for civil rights. An internationally respected pharmacologist, he was among the first to show that adrenaline is not a sympathetic neurotransmitter.

His grandson Chris Wright says few black people then were simply judged on talent. “It’s a testament to Canada at that time,” says Wright, who muses on whether his grandfather would have had as much opportunity in that era had he settled elsewhere.

Melville, pictured top left, in Cairo, with wife, Gladys, was a Freemason of the highest order. (Photo courtesy of Alexsandra Wright)

Over a period spanning almost half a century, Melville wrote more than 80 peer-reviewed scientific articles, primarily on the physiology of stress responses. He trained foreign graduate students, helped Nigeria develop its domestic medical program, and was a founding member of the International Union of Basic and Clinical Pharmacology. The media also sought out his expertise on the dangers of certain recreational drugs.

Melville, with wife, Gladys, in 1946, earned recognition from both Ebony and Jet magazines for his accomplishments. (Photo courtesy of Alexsandra Wright)

During the late ’30s, he chaired a defence committee for Fred Christie, a Jamaican-born black resident of Verdun, Quebec who was refused service at a tavern in the Montreal Forum prior to a hockey game. In 1960, Melville was arrested with seven other physicians attending a medical congress in Atlantic City after the cafeteria refused to serve them because they were black.

Although he worked primarily in research, Melville also ran a limited family practice. Wright remembers his grandfather each Christmas going around to the homes of all his patients, most of them fellow immigrants from the West Indies.

Melville, with daughter, Enid [Melville-Wright, BA, MDCM’59], in 1949. It has been suggested that Melville-Wright may have been the first black woman to graduate from McGill’s undergraduate medical program. She was one of only two women graduates for her year. (Photo courtesy of Alexsandra Wright)

Melville’s memory lives on at McGill through the Melville Fellowship in Pharmacology, a prize awarded for the best poster presentations on Pharmacology Research Day.

Melville, pictured here in the 1930s, served as Chair of Pharmacology & Therapeutics from 1953 to 1967. In 1972, he was named Professor Emeritus. He continued to publish even after retirement. (Photo courtesy of Alexsandra Wright)

With special thanks to Chris and Alexsandra Wright, to Joseph Hanaway, BA, MDCM’60, and to the Medicine Class of 1955 for inspiring this story.