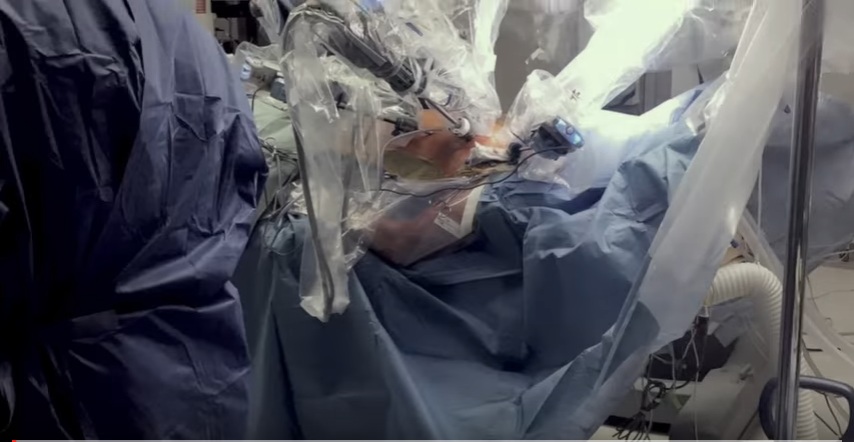 The Cardiac Surgery and Interventional Cardiology teams at the Jewish General Hospital (JGH) have joined forces to perform Quebec’s first robot-assisted coronary bypass, immediately followed by angiography (imaging of the blood vessels) to implant two stents (small tubes to keep arteries unblocked) during a single surgical session. This achievement was made possible through collaborative efforts in the Integrated Cardiovascular Science Program at the JGH.

“We were able to combine the best aspects of the bypass procedure with the stent procedure,” said Dr. Emmanuel Moss, who performed the coronary bypass.

Using the robot makes this type of surgery considerably less invasive, since the surgeon needs to make only three small incisions on the left side of the chest. Usually this procedure requires open-heart surgery, which requires the sternum to be cut open.

“As we do more and more of these procedures, as the team building grows, and as we take greater advantage of the hybrid room, we will be able to develop our expertise to become a leader in Canada,” said Dr. Lawrence Rudski, Chief of the JGH Division of Cardiology and Director of the Integrated Cardiovascular Science Program.

In addition to eliminating the risk of infection of the sternum and reducing the need for blood transfusions, this surgical approach shorten the length of the hospital stay from one week to two or three days. Convalescence is also much shorter, dropping from eight weeks to three.

“This is a perfect example of how the design our facilities and the collaborative process of our multidisciplinary teams is continually being refined to make the needs of patients and other healthcare users the primary focus of our efforts,” says Dr. Lawrence Rosenberg, President and CEO of CIUSSS West-Central Montreal.

“In the hybrid surgical suite, teams that would not normally work so closely together in a single space have undergone considerable training to modify their practices, in order to make surgery faster, more effective and less stressful for patients.”

The operation was performed on a Montreal-area resident in his 70s who suffered from atherosclerotic coronary heart disease.