The Ingram School of Nursing has named its 2020 Convocation Award winners, as well as the recipients of the one-time art-based Centennial Scholarships.

Established to commemorate the 100th anniversary of the Ingram School of Nursing (ISoN) in 2020, the Centennial Scholarships were to be presented ahead of ISoN’s Centennial on June 28th 2020. With an award of $2,000 for each, one scholarship is targeted for an undergraduate student and one for a graduate student for a piece of creative work in any medium, whether photo, drawing, video, poem, or other. The Centennial Steering Committee reviewed the submissions. Works of art were evaluated based on creativity, quality and visual appeal, as well as relevance to the Centennial and positive representation of nursing at McGill University. 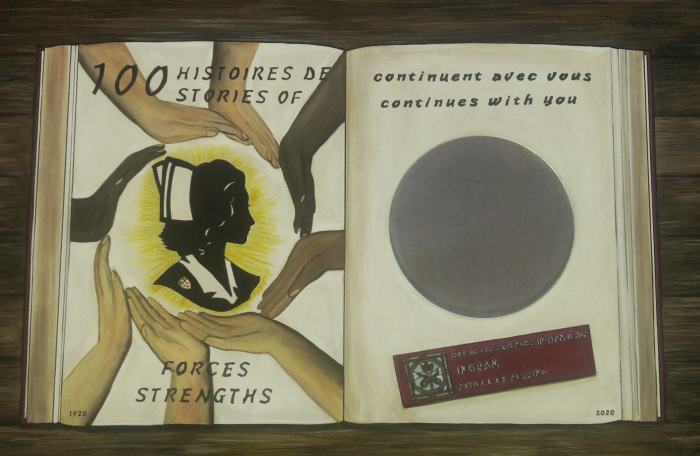 “This three-dimensional art piece is made up of a wooden table with an open book atop. The table reflects the woodwork within Wilson Hall that housed the School of Nursing from1962 until  the 2017 move to 680 Sherbrooke Street. The open book symbolizes the stories of the School of Nursing, with page numbers representing the years 1920 (past) to 2020 (present).

“The remaining pages symbolize the continued story (future). The nurse figured at the centre of the left page represents the iconic and universal image of a nurse with the pin indicating the McGill connection. The nurse is basking in a yellow glow, referencing the familiar yellow colour from Dr. Laurie Gottlieb’s Strengths-Based Nursing front cover. The eight hands encircling the nurse represent the eight core values of strengths-based nursing. The hands could also represent other McGill nursing alumni, colleagues, friends or loved ones, patients, or communities who also offer support to our nurses. This inspirational bilingual quote and symbolic mirror on the right page allow the viewer to feel a part of strengthening the School of Nursing story in that all of those who admire the painting could look up and see that the 100 Stories of Strengths continues with them. The bookmark, with Ingram School of Nursing (bilingual) written on it and featuring a familiar stained glass image, symbolizes movement: it has followed the reader from page to page, and will continue to move forward with the School’s story.” 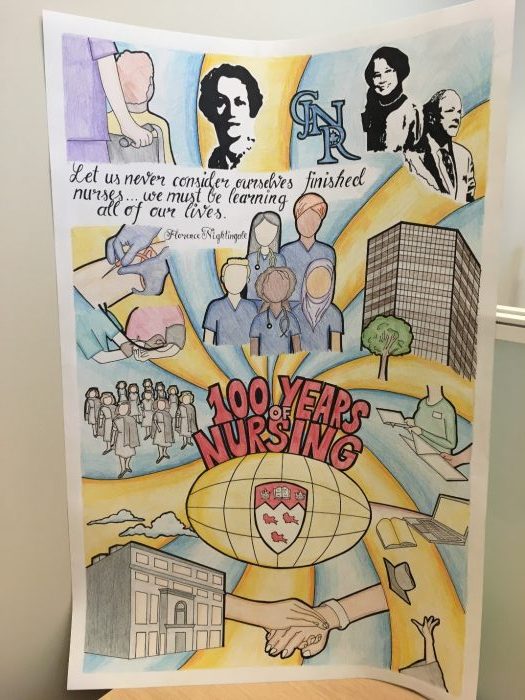 “This watercolor/crayon drawing is a tribute to the School of Nursing that spans 100 years. The buildings represent the ‘old’ Beatty Hall, where the school was housed between 1947 and 1962, and the skyscraper at 680 Sherbrooke Street, the School’s location since 2017. The students and nurses are presented as diverse and are depicted in their academic graduation gowns as well as their uniforms. The influence of [the Ingram] School of Nursing on the world is acknowledged and there is special recognition of Moyra Allen, the Canadian Journal of Nursing Research (CJNR), Richard and Satoko Ingram, and the well-known colour scheme of Dr. Gottlieb’s Strengths-Based Nursing book. The concept of caring is illustrated and the quote from Florence Nightingale is thought-provoking.”

2020 Convocation Award winners from the Ingram School of Nursing

The Lexy L. Fellows Convocation Prize was awarded to Catherine Farmer. Established in 1969 by Miss Rae Fellowes in memory of her mother, this prize is awarded to the student with the highest academic and professional achievement in the Bachelor of Science Nursing program.

The Evelyne Rocque Malowany Convocation Prize was awarded to Alanna Bouffard. Established in 2007 by Evelyn Rocque Malowany, this prize is awarded to a graduating student who has demonstrated initiative and leadership in the nursing profession.

The Barbara Ann Altshulter Convocation Prize was awarded to Hélène Fournier. Established in 2006 by David Altshuler and the Altshuler family in honour of his David’s mother, Barbara Altshuler, D.I.P, P.Th. 1958, this prize isawarded to an undergraduate nursing student on the basis of clinical and academic achievement.

The Anne Marie Hum Fong Convocation Prize was awarded to Jordan Lamadrid. Established in 1985 by Helen Fong Hum in memory of her sister Anne Marie, this prize is  awarded to a student who has demonstrated sensitivity and skill in helping patients and families cope with situations related to long-term illness.

The F. Moyra Allen Graduation Prize was awarded to Louisa Mussells Pires. Established in honour of the distinguished career and international renown of F. Moyra Allen, B.N., Ph.D., Emeritus Professor of Nursing, this prize is awarded to a graduate of the Master’s program who shows potential for a distinctive career in the study and practice of nursing.

The Pearson Education Book Prizes were awarded to Christiana Turcotte and Chloee Caron-Lavoie. This prize, courtesy of Pearson Education Canada, is granted annually to one student in each year of the undergraduate programs who demonstrates high academic achievement.