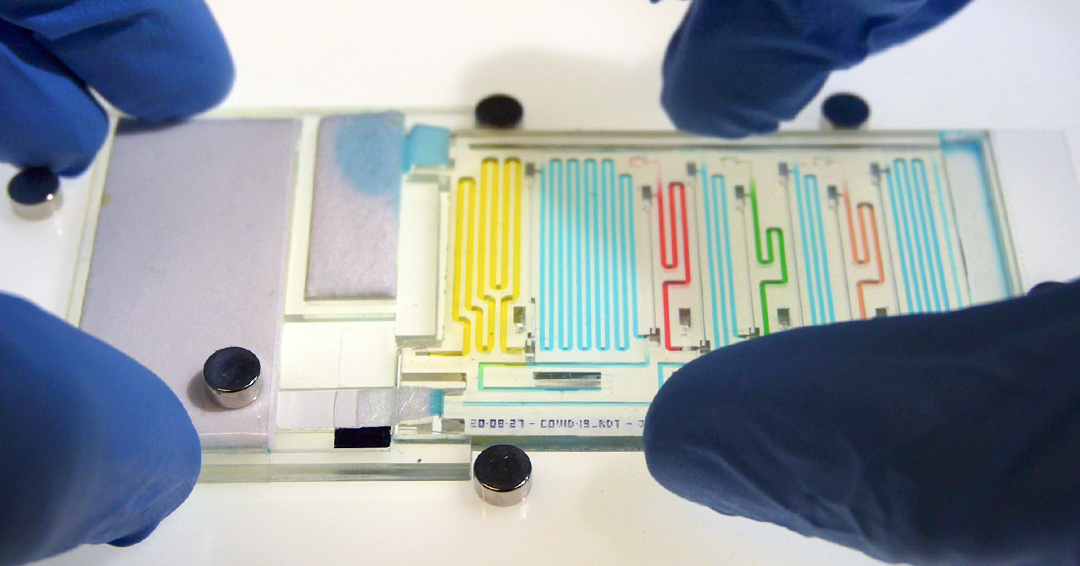 A team led by David Juncker, Professor and Chair of the Department of Biomedical Engineering, present a new type of 3D printed programmable ‘machine’ based on what they call a microfluidic chain reaction (MCR) in their new study published in Nature on May 18.

Different versions of the miniature machines were programmed by the team to automate, among others, a COVID-19 saliva test and a blood clotting test. These MCR machines can be 3D printed as monolithic plastic chips using designs downloaded from an app store, and do not require electricity. They can automate multi-step tests in an inexpensive, accessible format with the potential to simplify complex medical assays and save money. We spoke to the team about their research.

Can you explain how you came up with this approach?

The Juncker lab has been studying capillary ‘force’ for a long time and learned to control and harness it using geometrical features that can be monolithically printed as a maze of microscopic conduits. Capillary ‘force,’ or capillarity, is the process by which water from a spill is wicked into a paper towel, and is what drives the liquid across the white paper strip in rapid COVID-19 tests. In our lab, we build microchannel circuits that could sequentially flow multiple aliquots (ie, portions) of various solutions in a sequence through microscopic channels. However, up to now, we could only deliver a handful of different aliquots, while for medical assays many more are often needed. Thanks to the MCR, we were able to overcome this limitation as it allows the release of aliquots as a chain reaction, where each one is released only after the previous one is released, in turn triggering the next one. To illustrate this, the team printed four chips, each with 75 MCR trigger events, and ‘chained’ them together to form an MCR of 300 steps.

What are MCRs and how are they powered?

MCRs work much like falling dominoes or Rube Goldberg machines, except that instead of tiles or marbles, tiny plugs of liquids stored within microscopic reservoirs are being triggered and released, flushed, mixed, and merged, one after the other. Here, liquids set the process in motion, and the MCR  progresses along the microchannel circuit with tiny nooks and crannies guiding the filling and emptying of the liquid in various sections. As MCRs are predictable and can be expanded, moderately complex sequences of operations can be pre-programmed as an algorithm. MCRs don’t need lengthy preparation – unlike dominoes and Rube Goldberg machines – and can simply be printed as a maze of microconduits in a monolithic plastic block with a 3D printer. The different solutions can then be loaded, spontaneously filling by capillary flow. Finally, by applying a paper pump at the outlet, the MCR is triggered, and the structurally programmed algorithm is executed step-by-step, akin to a common computer algorithm where the code is executed line-by-line, but here tiny liquid plugs are triggered instead, and flushed along the microchannel circuit as the MCR progresses.

How did you apply this to COVID-19 testing?

We used MCR for the COVID-19 antibody test using saliva to evaluate immunity against COVID-19. In our test, an actual lab testing protocol with eight different solutions has been translated to our compact self-powered chip where these solutions flowed one after the other (see the video below) and produce a similar read out to a rapid test, with one line for a negative test, and two lines for a positive test, visible by eye and quantified using a cell phone camera. This could potentially help evaluate the level of residual immunity, and determine if and when someone may require a booster shot against COVID-19.

What are the advantages over current testing options?

Our approach preserves the form factor and function of rapid tests, but empowers them with complex procedures normally only available to laboratory tests. In existing COVID-19 rapid tests, the liquid sample applied to the inlet is drawn across the little paper strip holding the test and control lines by capillary flow that spontaneous arises and creates the driving ‘force.’ The great advantage of rapid tests is their compact form factor and spontaneous flow. However, their fluidic functionality is limited to one thing, flowing the liquid across the strip. Rapid tests compensate their lack of advanced fluidic functionality by adding and drying all the chemicals on the paper strips beforehand, and thus flowing all reagents and having all reactions occur more or less simultaneously, which comes at the cost of sensitivity and performance, and limits their use to simple yes/no answers. Laboratory tests are more sensitive and quantitative, and many tests exist that follow complex, precisely timed protocols where different chemicals are sequentially added, mixed, flushed, along with copious rinsing steps. Because many of these protocols are very laborious, they are being automated using a computer, and executed either by a robot or a sometimes a portable instrument. As result, they are mostly performed in a lab and it is not possible to run these complex tests at home. With the MCR, we can now encode these complex functions into the chip by programming sequential multi-step reactions.

Are there other uses for the MCR chip technology?

Yes, of course. Common tests that follow a specific protocol and that can be written out as an algorithm could be automated, and miniaturized, with a 3D printed MCR chip. After the COVID-19 tests, we turned our efforts to a complex blood clotting test (see above) and automated it for the first time in a miniaturized format. The test algorithm includes 10 iterations of built-in timers before each step, as well as simultaneous flow of the sample and another chemical solution; mixing; and storage for 30 minutes for continuous monitoring of the ongoing blood clotting reaction using a camera (see the video below). A blood clotting test could have many applications for emergency medicine (to predict which patients are at risk of clotting or bleeding), for home use and for monitoring the effect of blood thinning drugs.

As the chips are 3D printed, anyone with an appropriate 3D printer and resin could print our chip. To further facilitate wider adoption, we have shared our designs on a 3D design repository called Thingiverse where people can freely download them – in the same way than they can download an app on their cellphone – and modify them according to their needs and imagination, and then 3D print them. At this point, MCR chips require a high-resolution 3D printer, available from $300, an ionized gas treatment to activate the capillary force, a tape to seal them and a pipette to load the chips with liquids. We are currently working to make MCR chip technology more convenient with new designs that allow for easy addition of solutions, with new resins that circumvent the need for both additional treatments and the tape, and calibration chips to help benchmark your 3D printer performance for compatibility with different MCR chip designs.

Meet the Grads 2022: Mira Loock, BSc in Microbiology and Immunology