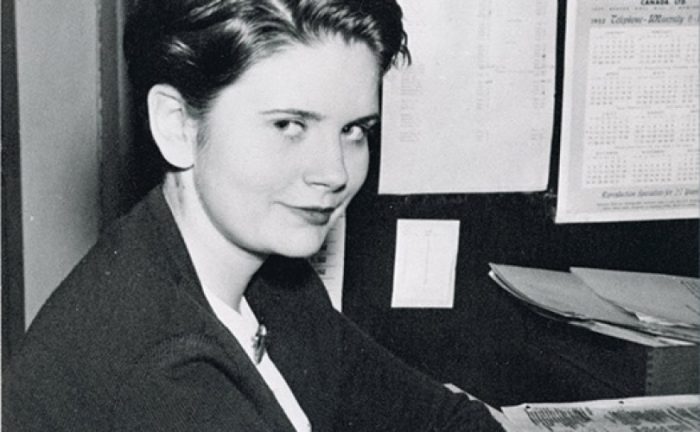 For years, infectious disease and global health experts warned a pandemic was inevitable.

One visionary Montreal foundation took heed, giving millions to cutting-edge research into the prevention, diagnosis and treatment of infectious diseases like COVID-19.

In 2018, the Doggone Foundation donated $15 million to McGill University and the McGill University Health Centre Foundation to launch “MI4” – the McGill Interdisciplinary Initiative in Infection and Immunity. With a network of more than 250 clinicians and researchers, MI4 is one of the largest groups in the world focused on infectious and immune-related diseases.

Less known is the Doggone Foundation and the singular woman behind it, the late Elspeth McConnell.

The Foundation she created has given or committed close to $50 million to date to beneficiaries that include McGill, Montreal hospitals, research and care initiatives in mental health, as well as the University of British Columbia’s Museum of Anthropology.

In recognition of Elspeth McConnell’s remarkable legacy, we’d like to take this opportunity to shed some light on this “anonymous” philanthropist with considerable foresight.

Helen Elspeth Bagg grew up in a middle-class home in Montreal’s Notre-Dame-de-Grâce district during the Depression. She read voraciously and in her early teens, too young to get a job, she convinced a bookstore owner to let her dust the shelves, so she could be close to books.

She left Montreal in her early 20s to take a job in Toronto editing copy and writing for the Weekend Magazine, a popular supplement in local newspapers distributed across Canada by the Standard/Star/Herald group, owned by J.W. McConnell.

She later moved back to Montreal and took a job at the Montreal headquarters of the Star/Standard group. It was there that she met her future husband, John G. McConnell, then publisher and president of the Montreal Star.

An eye for art

They bought works by up-and-coming artists. At one time, Elspeth had the only privately-owned Jackson Pollock in the country. They also bought works by Kandinsky, Klee, Picasso, Matisse, Chagall and Ernst.

“During the 60s, they bought through dealers,” says Paul R. Marchand, BCL’66, LLM’85, a Montreal lawyer who specialized in financial and estate planning for over 50 years, and represented Elspeth after John G.’s death (he also acted for several members of the McConnell family).

Marchand and Susan Avon, who was a paralegal at Marchand’s law firm, became friends with Elspeth in her later years and were her main support network.

Elspeth took art courses over the years and had a deep connection to art. “As a child, Elspeth had been given a souvenir totem and when she saw real totem poles in Vancouver, she said she was ‘blown away’”, Avon recalls.

The trip to Vancouver sparked her passion for the art of Indigenous peoples of Canada’s Northwest Coast. The works she collected were of extraordinary quality. Many of the historical pieces had left Canada 100 years ago or more and ended up in private collections and European galleries and museums.

The value of her art collection, 300 pieces strong and worth tens of millions of dollars, only came to light after a small fire in 2011 at her Westmount home. The paintings, sculptures and historical pieces weren’t damaged by the fire.

Much of the 20th-century art was sold, but Elspeth insisted that her impressive Northwest Coast art collection be donated to the University of British Columbia’s Museum of Anthropology (MOA). She wanted it returned to its home province and nearer to the communities to which the artists had belonged. She also donated $3 million to the MOA to create a completely renovated space to display the collection.

The Doggone Foundation was set up in 2012 with a focus on transformational gifts to the health sciences, education and art. Wanting to remain anonymous during her lifetime, Elspeth searched for a name. Doggone was chosen when she was forced to give up her dogs on moving from her home to a residence for seniors. “She liked the name Doggone because it protected her anonymity and it had several meanings, including ‘Doggone it!’” says Marchand.

Elspeth maintained that “private charity was necessary to protect scientific and medical excellence” and that government funding could not meet all needs. “She also felt that recruitment and training of top talent from elsewhere would enable Montreal to achieve and maintain world-class status.”

In another prescient move in the fall of 2019, the Doggone Foundation gave $1 million to kickstart Quebec’s first-ever online Bachelor of Nursing program at McGill’s Ingram School of Nursing.

Most recently, the Doggone Foundation gave again in support of MI4, through the MUHC Foundation, contributing to a more than $4.1-million multi-donor donation for a new Emergency COVID-19 Research Fund.

Elspeth McConnell passed away on August 12, 2017, but her Foundation continues her remarkable legacy. She was a visionary philanthropist who left her mark on Montreal and Canada, in a way that stands to benefit the entire world.